Professor Harry Arthurs has been a centrally important figure in Canadian legal education for more than fifty years. He came to national prominence as a legal scholar and educator with his seminal writing in the 1960s and 1970s on labour law. In the 1970s he was Dean of Osgoode Hall Law School, and in 1983 he was principally responsible for the seminal Law and Learning, the most important report on legal education in the past half century. From 1985 to 1992 he was President of York University. He has also served on many government commissions investigating various aspects of labour law, and as the President of the Canadian Civil Liberties Association. In addition to his labour law work he has written extensively on legal history, the legal profession and legal education, with a special emphasis on the effect of globalization on the latter two topics. This book, both a ‘life and times’ and an autobiography, is the memoir of a person who has lived his professional life to the full and rendered his country much meritorious service. It covers all aspects of his career, a compendium of trials, tribulations and triumphs, with frankness, perspicacity, and humour.  Readers will learn about the ‘blacks arts’ of academic administration as well as why Arthurs can call himself a ‘useful idiot!’

REVIEWS OF CONNECING THE DOTS: THE LIFE OF AN ACADEMIC LAWYER HAVE ALSO APPEARED IN THE FOLLOWING: 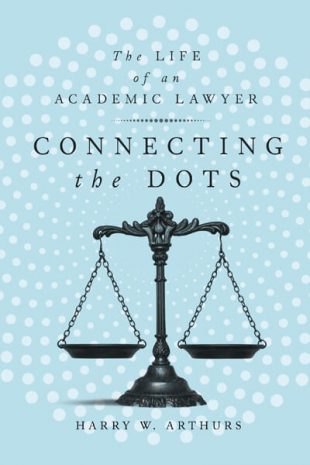 Introduction: To Write or Not to Write? / 3