Eric Reiter’s Wounded Feelings: Litigating Emotions in Quebec,  has been named as a co-winner of the monograph prize from the Fondation du Barreau du Québec. The official notice can be found here: https://www.fondationdubarreau.qc.ca/decouvrez-les-laureats-du-concours-juridique-2021-et-les-regles-de-ledition-2022/.

The Osgoode Society is thrilled to announce that Wounded Feelings: Litigating Emotions in Quebec 1870-1950, by Professor Eric Reiter, has been awarded the Canadian Historical Association’s Prize for the best scholarly book in Canadian history. Congratulations to Professor Reiter.

By Eric Reiter. Published by the University of Toronto Press.

Wounded Feelings analyses the law and litigation involving defamation, breach of promise of marriage, personality rights, and religious beliefs. These were all areas of ‘emotion’ in which Quebecers – lawyers and judges as well as litigants – dealt with the intersection between the subjective world of the emotions and the world of the law, through the idea of moral injury. The author The author uses published law reports and existing archival records of some of those cases, as well as a wide range of other sources, to offer fascinating vignettes that reveal much about day to day life, functional and dysfunctional families, and the dynamics of social and power relations of class, status, age, race and gender across an eighty year period of Quebec history. The discussion of the cases enables the author to demonstrate the complicated blending of the French civil law and the English common law as well as to chart major legal shifts over time.

Emotions are an integral part of appeals to law whether tacitly or formally acknowledged. This affective dimension is explored in Professor Eric Reiter’s new book, … a social and legal history of the way that emotions were articulated, recounted, and framed in legal actions over an 80-year period of Quebec’s history, and how these emotions were validated, rejected, or ignored by the legal actors who heard or otherwise encountered them. This meticulously researched, legally sophisticated, and empathetic book contributes to our understanding of civil and common law actions and actors, family and broader social dynamics of the period, and the legal development of personality rights in Quebec law. It also constitutes a foundational work in the emerging field of the legal history of emotions through its original thesis and methodology that should provide a template to other historians wishing to explore the legal history of emotions…. Throughout, Reiter shows the powerful potential of the legal history of emotions to alter our perspective and reveal novel legal disputes as interesting, not for their specific legal holding, but for the rich emotional landscape in which they occurred. This penultimate chapter will be a valuable resource both methodologically and substantively for historians interested in discrimination in Quebec, and in Canada, for years to come. Reiter’s final chapter, Chapter 8, provides a satisfying coda exploring the translation of emotion-based legal actions into the language of rights. This book is an immense contribution and invitation to future work. Tina Piper, Law and History Review, Volume 39, 2021, pp. 410 – 412.

REVIEWS OF WOUNDED FEELING: LITIGATING EMOTIONS IN QUEBEC HAVE ALSO APPEARED IN THE FOLLOWING: 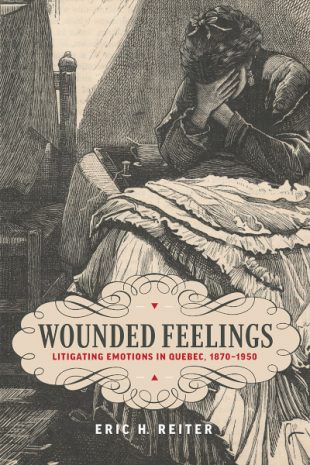 1. FEELINGS AND THE LAW IN NINETEENTH-CENTURY QUEBEC / 29
Injure
Biens
“Right” and “No Right”
Damages

7. INDIGNATION, ANGER, FEAR / 259
No Blacks Allowed in the Orchestra Chairs: Johnson v. Sparrow
Refusal of Service Cases: Successes at Trial, Reversals on Appeal
Get Out of Town: Lundell v. Masse