In recent years, scholars in all disciplines, feminists and traditionalists, have increasingly recognized how significant issues of gender are in understanding most aspects of the human condition. Indeed gender as a category of analysis has assumed a place at least as central as class and race in the very best historical work. In Uncertain Justice, the husband and wife author team of Beverley Boissery and Murray Greenwood apply gender analysis to the study of the trial and execution of female criminals in colonial and modern Canada. Through eight major case studies and many minor ones Uncertain Justice reveals the evolution of this aspect of capital punishment across the course of Canadian history. An analytical introduction and conclusion bracket the case studies and together with two thematic chapters engage critical general issues. Most notably these include the execution of those who may have been innocent, the long exclusion of women from criminal juries, the emergence of the “battered woman syndrome,” and jury nullification of many laws, including infanticide and abortion. Two themes which loom particularly large are the use of paternalistic ‘sham chivalry’ to protect individual women at the expense of stereotyping them generally as weak-minded, and the relentlessly political nature of much of the criminal law process, particularly with regard to the exercise of mercy. Uncertain Justice is an engagingly written book which offers numerous insights into one of the darker sides of Canadian criminal

Beverley Boissery is a independent historian and an author. She has written eleven books ranging from academic history to young adult fiction. In the 1960s she worked as an elementary school teacher and then went back to school in the 1970s to earn her Bachelor’s degree and Doctorate. She has been a scholar-in-residence at Regent… Read more » 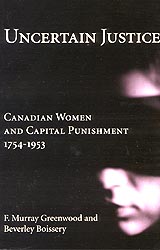 Chapter One: The Eleanor Power Story 23

Chapter Two: The Many Trials of Marie-Josephte Corriveau 39

Chapter Ten: Annie Rubletz and Mary Paulette —
“The Far Side of Despair” 197