Robert J. Sharpe. Published with Carswell, 1988. “Out of Print. Second edition published in 2009.

Books about trials readily capture the attention of a public interested in the drama of courtroom confrontation, and they offer an opportunity to present often complex legal issues in an appealing and readable format. In their reconstruction of past legal and judicial methods, they also serve to highlight the changes in law and procedure that have occurred over time.In this study, Professor (now Judge) Robert Sharpe has achieved all this and more. In 1927 an Ontario newspaper carried a column alleging that Sir Arthur Currie, in the final hours of the First World War, had shown reckless disregard for the lives of his troops in the pursuit of vainglory. Such rumours had been circulating for years, and Currie proceeded to meet them by initiating a highly risky action at law. These was much poignancy and some irony in the circumstances. A colleague had once said that he had ‘an almost fanatical hatred of unnecessary casualties.’ Currie evidently saw this trial as representing in a sense the final battle of the Canadian Corps. Like so many previous battles, however, this one exacted a high price, as Robert Sharpe so effectively illustrates in his reconstruction of this famous Canadian trial.

Reviews of The Last Day, the Last Hour: The Currie Libel Trial

See the reviews listed under the second edition, published in 2009. 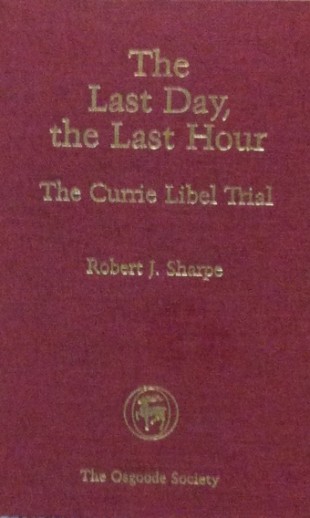