by Robert J. Sharpe, Justice of the Ontario Court of Appeal. Published with the University of Toronto Press, 2009 (first edition published by Carswells, 1988).

The Osgoode Society first published Robert Sharpe’s study of the libel action launched by Sir Arthur Currie in 1988, sixty years after the case itself had captured the attention of the whole country. In the two decades since it has been our best seller, and we are reprinting it in a new edition as part of the our 30th anniversary celebrations. The story of Currie’s response to allegations that as commander of the Canadian Corps in the first world war he had recklessly risked the lives of his troops in an attempt to gain credit for himself has lost none of its appeal. This is a fascinating account of one particular trial, a book that tells two compelling stories – the military and the legal – interwoven with human frailty, vanity and pride.

Reviews of The Last Day, the Last Hour: The Currie Libel Trial

Professor Robert Sharpe ... particularly excels in developing the human drama being played out in the courtroom, while at the same educating his readers (whether lawyers or not) with the legal niceties of what is happening. C.O.D. Branson, The Advocate, vol 49, 1991

This book is like a play within a play--within the meticulously researched, well-written and at times gripping history of the trial and the events and persons that produced it lies the trial itself, also an attempt to recreate the past but through the distorting lens of an adversarial trial process and the restrictive rules of pleading and evidence.... [It] also provides interesting background to the ongoing tension in Canadian law between rights of free expression and the public's right to information and the individual's right to privacy or, in the criminal context, a fair trial. Canadian courts continue to grapple with the same issues today. For the lay reader, this is an excellent (and enjoyable) introduction. Colin Campbell, British Journal of Canadian Studies, vol 24, 2011, p. 85.

I would consider using the book with students as a model of historical writing.... This book has been republished for a reason. It deserves to be read. Brock Millman, H-Law, September 2011. 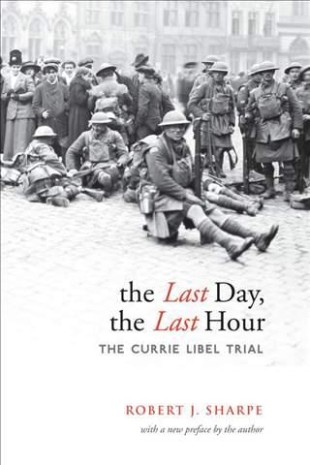 2 Arthur Currie, the Great War, and the Canadian Corps 16