In 1940 Elizabeth Campbell published a remarkable book Where Angels Fear to Tread telling the story of her determined battle against much of Ontario’s legal establishment as she endeavoured to prove that her uncle, a long-time bencher of the Law Society of Upper Canada, had stolen funds from her mother’s estate. Her struggle carried her in 1930 all the way to the Judicial Committee of the Privy Council in England where Mrs. Campbell argued her own case and won an astounding victory. Mrs. Campbell’s book is reprinted in its entirety together with an extensive introduction, epilogue, and research notes that illuminate the context for Campbell’s story.

Reviews of The Heiress versus the Establishment: Mrs. Campbell’s Campaign for Legal Justice

I would highly recommend this excellent book for anyone concerned with professional monopolies, self-regulation, and elitism in the legal profession and the judiciary. These authors provide insightful commentary on all of these contemporary issues. Joan Brockman, Labour/Le Travail,   Vol 58, 2006.

The Backhouses' introduction and epilogue lucidly explain the niceties of the litigation. They do an even better job of providing a historical backdrop ... Mrs. Campbell was a gifted writer. She describes the long arc of her trial tribulations wittily and with a keen eye for details of dress, habit, physiognomy, and even architecture. Douglas Johnston, The Beaver, Vol 84, 2004.

The study of Canadian history, often the butt of jokes about snooze buttons, does manage to come alive on occasion, especially when the Backhouse name is connected with it.... A reprint of a remarkable historical document that charges some of the most powerful figures in Canadian legal history with unsavoury behaviour....That the Backhouses have done such an elegant job of recreating the context and reprinting the story is, in the strongest sense, a true act of justice. Matthew Behrens, Quill and Quire, Vol 70, 2004.

Madam Justice Nancy Backhouse is currently serving on the Superior Court of Justice for Ontario. Before her appointment to the bench, Justice Backhouse was a family law lawyer and labour arbitrator. She was also a bencher and chair of the Admissions and Equity Committee of the Law Society, vice-chair of the Ontario Grievance Settlement Board,… Read more » 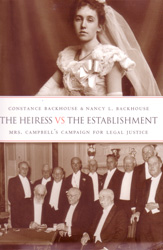