This latest collection in our State Trials series, the fourth, looks at the legal issues raised by the repression of dissent from the outset of World War One through the 1930s and the Great Depression. Topics covered include enemy aliens, conscription and courts-martial in World War I, the trials following the Winnipeg General Strike, sedition laws and prosecutions generally and their application to labour radicals in particular, the 1931 trial of the Communist Party leaders, and the religious-political dissent of the Doukhobors. All regions of the country are covered, and special attention given in one essay to Quebec’s repression of radicalism.

The volume focusses attention on older manifestations of contemporary dilemmas: what are the acceptable limits of dissent in a democracy, and what limits should be placed on state responses to perceived challenges to its authority.

Reviews of Security, Dissent and the Limits of Toleration in War and Peace: Canadian State Trials Volume IV, 1914-1939

Each article tells human stories, analyses institutional systems, maps judicial procedures, assesses courtroom outcomes and attempts to contextualise anecdotal and aggregative data …. [The volume] begins and ends with Canada going to Europe’s two wars, between parliamentary passage of the War Measures Act (22 August 1914) and the declaration of war against Germany (10 September 1939)… The book is a great read.’

Professor Eric Tucker has been teaching at Osgoode Hall Law School since 1981 and served as Graduate Program Director from 1998 to 2001. He is interested in labour law and is involved in law reform initiatives through his participation on the board of the Injured Workers’ Consultants, a community legal clinic. He has published in… Read more »

Susan Binnie is an independent scholar living in Toronto. She was formerly a professor at the University of Ottawa and was also a visiting fellow at the Centre of Criminology, University of Toronto. She has published on parole and legal history. She will be continuing her involvement with the Osgoode Society as the co-editor of… Read more » 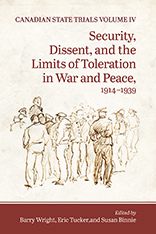