by Donald Fyson, Professor of History, Universite Laval. Published with the University of Toronto Press, 2006.

This book is a study of everyday criminal justice in Quebec and Lower Canada between the Conquest and the Rebellions, concentrating on the justices of the peace and the police. The first half explores the criminal justice system itself: the transfer and adaptation of English criminal law and courts, the appointment and character of the magistracy, and the police. The second half presents an overview of everyday criminal justice in operation. Prof. Fyson argues that neither the Conquest nor the Rebellions represented radical breaks with the past. There was considerable continuity despite the Conquest, both in structures and in personnel. Conversely, state formation was well underway before the Rebellions, responding to the demographic, social and economic changes that swept the colony. Criminal law and the criminal justice system were modified to suit local circumstances, and the magistracy and the police, became increasingly professionalized. The relationship between the people and the system also changed dramatically across the period. This is perhaps best exemplified by the steady increase in the rate of criminal prosecution. From being relatively marginal, local criminal justice became increasingly used by both the Canadien and British populations of the colony, especially in urban areas.

Don Fyson’s award winning book has now been translated into French, the second Osgoode Society book published in French. It came out with Hurtubise in 2010, part of that publisher’s Cahiers du Quebec series.

Donald Fyson's account of criminal justice in Lower Canada and Quebec between British conquest in 1764 and the rebellions of 1837 offers a refreshing departure from more mainstream historical accounts of criminal justice in the colonies. Michael Young, International Criminal Justice Review, Vol 18, 2008, p. 482

This well written, thoroughly researched, and innovative book will be a valuable resource to anyone interested in legal history or in exploring the relationship between the Quebec legal system and some of the complex questions of Quebec historiography. It will also be invaluable for comparing the criminal justice system in Quebec with those operating in other parts of North America, and in examining how British legal systems functioned in different colonial environments. David Murray, American Historical Review, Vol 112, 2007, p. 1524

Donald Fyson is Professor of History in the Département d’histoire of Université Laval. He has published extensively in eighteenth, nineteenth and twentieth- century Quebec history, with a focus on the relationship between state, law and society, especially as seen through the criminal and civil justice system, the police and local administration. These themes are explored… Read more » 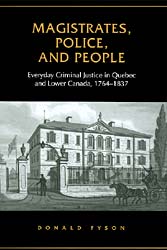 1 English Justice in a Foreign Land 15

3 The Character of the Magistracy 95

4 The Police before the Police 136

5 The Relevance of Criminal Justice 184