There is now a large volume of literature on Canadian labour history. In this literature, there has been no lack of attention paid to numerous issues involving the legal rights of unions and employers, but often there has been a lack of clarity in the discussion of labour-law issues. This book, based both on a careful sifting of the secondary literature and on painstaking archival research, effectively and authoritatively addresses this situation. The authors demonstrate that the period under discussion saw a critical transition from a legal regime characterized by the predominance of the values of legal individualism and freedom of contract to an era of industrial pluralism. This important book demonstrates why and how the new regime was put in place and assesses the degree to which it simultaneously embodied a marked departure from what preceded it and a revitalized commitment to market ordering and voluntarism. Professors Fudge and Tucker have given us what probably will remain the definitive legal study of an innovative and critical phase in industrial relations in Canada.

Reviews of Labour Before The Law: The Regulation of Workers’ Collective Action In Canada, 1900-1948

This book is a useful and welcome contribution that effectively synthesizes a substantial body of scholarly writing with new archival research. It gives the provinces their due in a story that has formerly been told largely from the federal perspective. Paul Craven, Canadian Historical Review, vol 83, 2007

Labour Before the Law deserves a wide and appreciative readership. Fudge and Tucker offer compelling arguments about the increasing importance of the law to the lives and movements of workers and about the importance of labour relations generally to the contours of state formation in the first half of the twentieth century. Todd McCallum, Labour/Le Travail, Vol 53, 2004, p. 257

Fudge and Tucker's book tells us a great deal about the social conflicts that formed the Canadian industrial relations system and the 'responsible unionism' that is now being peeled back. G. Albo, Canadian Journal of Political Science, vol. 36, 2003

This is an indispensable book for both labour specialists and historians more generally... [A] remarkable synthesis of workers' collective action in Canada between 1900 and 1948. Steven High, Urban History Review, Vol. 30, 2001, p. 68.

Professor Eric Tucker has been teaching at Osgoode Hall Law School since 1981 and served as Graduate Program Director from 1998 to 2001. He is interested in labour law and is involved in law reform initiatives through his participation on the board of the Injured Workers’ Consultants, a community legal clinic. He has published in… Read more » 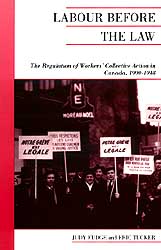