Section 93 of the Constitution Act 1867 guaranteed certain educational rights to Catholics and Protestants in Quebec, but not to anybody else. This study of the challenges, legal and otherwise, encountered by Jewish parents in educating their children in Montreal in the shadow of s. 93, will undoubtedly become the standard work on the subject. Faced with alternating periods of hostility and tolerance, the Jewish community of Montreal carved out an educational modus vivendi based on complex and continuing negotiations with the Protestant and Catholic school boards, the provincial government, and individual municipalities. Divisions within the Jewish community itself, with different groups alternating between cooperation and militancy, only added to this complexity. In the face of the constitution’s exclusionary language, all parties engaged in modes of informal normative ordering that were at times frankly unconstitutional, but unavoidable if Jewish children were to have access to public schools.  Bargaining in the shadow of the law, the parties made their own constitution long before the constitutional amendment of 1997 finally put an end to the Jewish school question.

David Fraser’s Honorary Protestants is an impeccably researched history of the tensions, contexts, and meanings of the struggles to delineate how, in what manner, and with which accommodations Jewish children were schooled in the Montreal public school system. It is a welcome addition to the fields of Canadian legal history, modern Jewish history, Quebec history, and the history of education in Quebec…. [A] compelling illustration of the inadequacy of ‘two solitudes’ as a framework for understanding social reality or law in Quebec.’  David Koffman, University of Toronto Quarterly, Vol 86, 2017, p. 145.

REVIEWS OF HONORARY PROTESTS HAVE ALSO APPEARED IN THE FOLLOWING 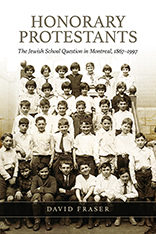 3. Schools, Taxes, Jews, Catholics (and Protestants): The Origin of the Jewish School Question 60

10. The Protestant Jews of Ste Sophie and La Macaza: Constituting School and Community in Rural
Quebuec 273

11. Outremont and Beyond: The Jewish School Question Moves West 300

12. Hampstead and Beyond: From the Ghetto to Citizenship and Equality under Law’s Shadow 329

14. Constituting Canada and the Jewish School Question in Montreal, fin 385