When Richard Pound told us he was working on a biography of Wilbur Jackett, former Chief Justice of the Federal Court of Canada, and asked us to consider publication, we were pleased and somewhat sceptical. We had recently published Ian Bushnell’s history of the Federal Court of Canada and Wilbur Jackett’s attitude towards that enterprise seemed to us to have been a combination of scepticism and disapproval. Chief Justice Jackett, it appeared, was of the old school and believed the judiciary should be, rather like the British Navy in days of yore, “the silent service.” In the circumstances we wondered whether it would be possible to produce a full and accurate biography.The author has proved us wrong. In this study he paints a portrait of a lawyer who had enormous influence – much of it behind the scenes – on the administration of justice in Canada. Deputy Minister of Justice. General Counsel for C.P.R. President of the Exchequer Court of Canada. Scene-setter for the Canadian Judicial Council. Father of and midwife to the new Federal Court of Canada. Leader extraordinaire of that Court during its formative years. Rigorous legal thinker and judge. Procedural innovator, yet largely unknown outside of a small circle of friends and colleagues. This biography traces the path of Jackett through a significant period in Canadian legal history and provides unique glimpses of the Department of Justice and the courts in action. We believe it will be read and appreciated by a wide audience and deserve to occupy an enduring place in Canadian judicial biography.

Reviews of Chief Justice W.R. Jackett: By the Law of the Land

Richard Pound’s biography of Chief Justice Jackett is an insightful and articulate look at the life of one of Canada’s leading 20th century jurists...the biography is a tour de force of meticulous research, a must-read for anyone interested in the evolution of the Canadian judicial system. Laurent William Bartleman, Saskatchewan Law Review, Vol 64, 2001, p. 303.

Richard Pound is a partner in the Montréal office of Stikeman Elliott and member of the firm’s Tax Group. His main areas of practice include tax litigation and negotiations with tax authorities on behalf of clients, in addition to general tax advisory work and commercial arbitration. He is a member of the Quebec and Ontario… Read more » 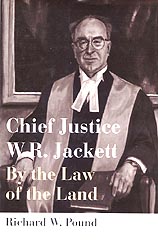 Appendices
1 Extracts from Chief Justice Laskin’s Judgment in the
Capricorn Case 291
2 Department of Justice Lawyers, 1938-65 296
3 Minister of Justice and Deputy Ministers of Justice 301
4 Interviewees and Correspondents 304