edited by Barry Wright, Department of Law, Carleton University, and Dr. Susan Binnie. Published with the University of Toronto Press, 2009.

This third volume of the Osgoode Society’s Canadian State Trials series covers the period from the 1840s to the First World War. It examines a range of political trials as traditionally defined, including those arising from the Fenian invasions and the North-West Rebellions. The volume also expands the definition of state trials to include studies on the early development of secret policing and the evolution of the legal regulation of riot and public order. The editors have assembled a team of experts from across the country in a variety of fields, and produced a comprehensive and fascinating set of studies of the use of law to control political dissent and public disorder.

Volume 3 [of the Osgoode Society's State Trials series] is a comprehensive collection of studies covering the period 1830 to 1914 ... contributed by sixteen scholars in the fields of law and history. All regions of the country are represented except British Columba.... One important theme in the collection is that in the past the full might of the law in 'political' surveillance and prosecutions has been tempered more by political expediency or realities than by the abstract principles of the rule of law.... The book is somewhat intimidating in size but well worth the effort. Greg Marquis, Canadian Historical Review, vol 91, 2010.

Susan Binnie is an independent scholar living in Toronto. She was formerly a professor at the University of Ottawa and was also a visiting fellow at the Centre of Criminology, University of Toronto. She has published on parole and legal history. She will be continuing her involvement with the Osgoode Society as the co-editor of… Read more » 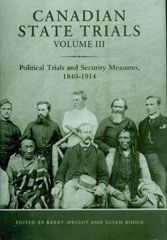