Barry Wright is Professor of Law and Criminology at Carleton University. Eric Tucker is a Professor at Ogoode Hall Law School. Susan Binnie is an independent scholar. The fifth and final volume of the Canadian state trials series examines political trials and national security measures occurring for the period 1939-1990. Essays by historians and legal scholars examine experiences during the Second World War and its immediate aftermath (use of the War Measures Act to register enemy aliens, and Japanese Canadian property confiscations, relocations and internment, and post war deportations and appeals, as well as war crimes proceedings), the early Cold War (the Gouzenko Affair, investigations and spy trials under the Official Secrets Act), political and legal responses in Quebec to the FLQ from 1963-72 (including the October Crisis), and legal responses to labour and Indigenous resistance (strikes and standoffs). The chapters examine legal responses set out in the relevant political, economic, social and cultural contexts, and illuminate common themes between chapters within the volume and with those in previous volumes of the series. This volume concludes the first comprehensive look at this area of Canadian law and politics and provides insights into the tensions within the rule of law, between executive authority and liberties, and between state sovereignty and self-determination. 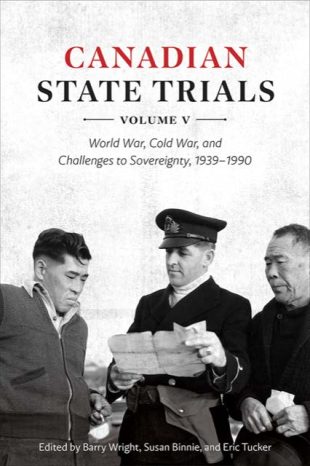