by Sidney Harring.  Published with the University of Toronto Press, 1998.

In recent years numerous important books have appeared which deal with the history of aboriginal populations in early Canada. Although these studies add enormously to our understanding of the role played by native peoples in the British North American and Canadian communities, there has been to date no significant study of the dynamic and at times tragic relationship between Euro-Canadian law and the legal traditions of aboriginal populations. Professor Sidney L. Harring now addresses that lacuna in this sweeping re-investigation of Canadian legal history. In the nineteenth century, many Canadians commented proudly on what they regarded as this country’s liberal treatment of Indians. In challenging that conception, Professor Harring draws on scores of nineteenth-century legal cases. His study demonstrates that colonial and early Canadian judges were sublimely ignorant of British policy concerning Indians and their lands and arrogantly indifferent to native rights and traditions. A great strength of the study is its account of the remarkable tenacity of First Nations in continuing their own legal traditions despite obstruction by the settler society that came to dominate them. Today legal decisions respecting native rights and land claims reverberate throughout our society, affecting the rights and obligations of all Canadians. This study helps us to understand and come to terms with how we arrived at our present condition. It leaves no doubt that Canadian native legal culture requires further study by scholars and that aboriginal history demands more serious attention by courts in rendering decisions.

Harring has written a powerful ... legal history that gives due attention not only to the intent and actual impact of western law on aboriginal lives and resources and rights but also pays attention to aboriginal law itself.....This is an outstanding legal history of a complex and nuanced subject matter. Anyone interested in the historical and legal rights of Canada's aboriginal people or that state's avowed and actual Indian policy and jurisprudence should study it carefully. David Wilkins, Law and History Review, vol 35, 2002

White Man's Law effectively localizes Canadian legal history. It addresses conflicts with a keen awareness of specific context. This text is provocative and impressive in that it does not attempt to homogenize or essentialize the place of First Nations in the various legal contests that it addresses. Desiree Lundstrom, Canadian Literature, Autumn 2002

Dr. Sidney Harring is Professor Emeritus at the City University of New York School of Law. Besides teaching undergraduate sociology and law, he has done extensive research and scholarship on juries, police, American Indians, and the social history of American law. These wide-ranging interests have taken him around the world; he has been a visiting… Read more » 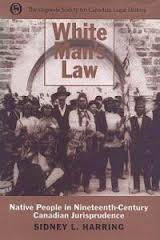