Lord Haldane is well-known to historians of Canadian constitutional law as one of the Privy Council judges most responsible for re-shaping the division of powers in the direction of greater provincial power after World War One. This deeply-researched biography Fred Vaughan, author of a biography of Emmett Hall published by the Osgoode Society in 2004, puts Haldane’s Canadian decisions in the context both of Haldane’s life and thought and prior Canadian jurisprudence. Haldane’s education, his devotion to Hegelian philosophy, his work as a leading barrister, his various causes, especially education reform, and his service in the War Cabinet are all analysed, as are some intriguing personality quirks. What emerges is a picture of a complex and deeply principled jurist, and a better understanding of why we got the constitutional division of powers that we did.

Reviews of Viscount Haldane: "The Wicked Stepfather of the Canadian Constitution"

Viscount Haldane: “The Wicked Step-father of the Canadian Constitution" is a meticulous examination of Haldane’s role in reworking Canadian federalism and of Hegel’s influence on Haldane’s jurisprudence. Frederick Vaughan is scrupulously fair to Haldane… This is a thoroughly researched and thought–provoking biography, which will be useful for scholars of Canadian history, politics, and law, as well as those interested in the evolution of the commonwealth.’ Stephen Azzi, The Historian, Vol 74, 2012, p. 640. 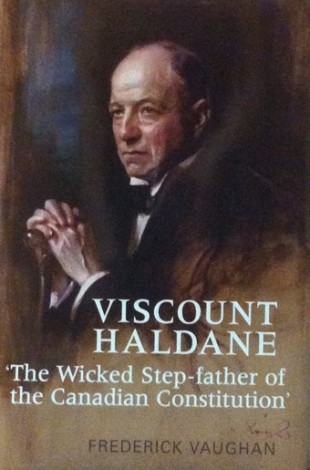 1 Home and School for the Mind 5

3 The Practice of Law and Life in Parliament 43

4 From the Inns of Court to the War Office 75

5 Haldane in the School of the Master 103

6 Haldane in the Shadow of Lord Watson 118

7 Haldane and the Reign of Sittlichkeit 145

9 The State and the Reign of Relativity 188

10 Supreme Tribunal of the Empire 199

Postscript: The Haldane Legacy and the Modern Court 238