With great skill and diligence, Professor Ziff has taken hold of an apparently narrow topic and has used it to open up a wide window into some fascinating and neglected themes of the Canadian past. His subject is a sensitive and controversial one. In 1923, the Canadian mining magnate and philanthropist, Colonel Reuben Wells Leonard (1860-1930), endowed a scholarship fund. The deed creating the Leonard Trust asserted Colonel Leonard’s belief that ‘the White Race is, as a whole, best qualified by nature to be entrusted with the development of civilization,’ and restricted awards only to persons who were white, Protestant, and of British nationality or parentage. For over six decades, scholarships were awarded in accordance with the curious and disturbing terms set out by Colonel Leonard in 1923. Over this period, some notable Canadians served on the Leonard Foundation’s selection committee. However, in time controversy swirled around the Foundation and in 1986 the validity of the discriminatory qualifications was called into question. At first instance, an Ontario court found the trust valid, a holding that was reversed four years later by the Ontario Court of Appeal. In his study of the life of Reuben Wells Leonard, Professor Ziff chronicles the fortunes of the Leonard Foundation Trust in the context of an analysis of shifts in Canadian law and society concerning property rights and discrimination then (circa 1923) and now. This book dramatically reminds us of the changes which took place in Canadian values and beliefs between the 1920’s and the 1980’s. It offers penetrating insights into the extent and nature of societal evolution.

Ziff's ability to make such complex legal questions accessible to the lay reader makes one wish to be a student in his law classes. Carmela Patrias, Canadian Historical Review , vol 83, 2002

An original and illuminating perspective on Canadian attitudes to empire, race, religion, education, and philanthropy, and on the role of the law and public policy in protecting human rights in twentieth-century Canada... compelling reading. Canadian Not-For-Profit News vol 9, 2001

Professor Ziff deserves accolades for defining the contours of the debate with such elegance and sophistication.... It is a highly successful attempt at multi-tasking in scholarship. At various stages in the book, Professor Ziff dons different hats - as legal scholar, historiographer, social scientist, public policy analyst and social historian - all with astounding success. The end product is a book that must be read by students of law and public policy, lawyers, judges and legal historians. Paul D. Ocheje, Windsor Yearbook of Access to Justice, vol. 20, 2001

Bruce Ziff is a professor in the Faculty of Law at the University of Alberta. His main research interest is in the area of property law, and he is the author of the leading Canadian text, Principles of Property Law, now in its fifth edition. In 1988 he received the A.C. Rutherford Award for Excellence… Read more » 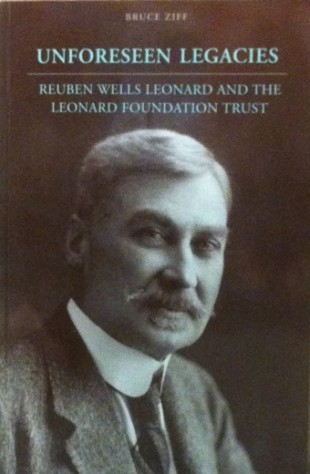 Introduction 3
1 Who Was Reuben Wells Leonard? 12
2 The Leonard Foundation Trust in Context 52
3 Leonard under Siege 98
4 After Leonard 136
Epilogue 163