Canadians know little about the history and traditions of their highest court. In providing the first comprehensive history of the Supreme Court of Canada, James Snell and Frederick Vaughan make a significant contribution to Canadian history. Their study deals with such central concerns as the Court’s relationships with government and politicians, the perception of the Court on the part of the bar and the public, and the Court’s internal administration and personnel. Leading cases are discussed in their historical context to illustrate the main tendencies in the Court’s jurisprudential evolution.Throughout, the authors emphasize the relationships between the Court and the larger society. Often the story they tell is a starling one, especially with respect to the all but crippling problems the Court faced during the first half-century of its life. This is not an account of a steady or automatic process but rather of gradual growth in stature in the face of many obstacles. In this history, Professors Snell and Vaughan demonstrate that the life of institutions, like that of individuals, is complex and uncertain. With the Charter of Rights and Freedoms in place as part of the constitution, the Supreme Court now plays a vastly expanded role in Canada’s system of government. This book adds greatly to our understanding of our judicial heritage and governmental traditions.

Reviews of The Supreme Court of Canada: History of  the Institution

As a [preliminary] effort to grapple with the changing moods and styles of the Court and its impact upon Canadian politics and society, the book is an invaluable contribution.  Peter McCormick, Canadian Journal of Law and Society, vol 2, 1987, p. 201.

James Snell is Professor Emeritus in the Department of History at University of Guelph, where he has worked since 1968. His research interests include the history of divorce and marriage breakdown in Canada, Canadian political history and history of state policies regarding various social problems. He can be reached at jsnell@uoguelph.ca. 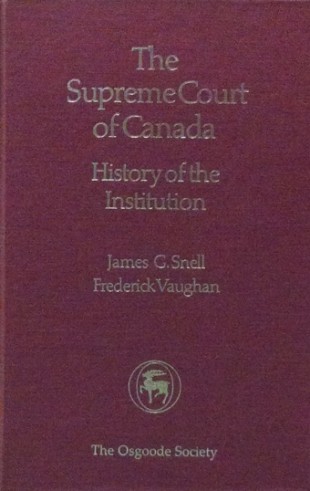