One of Canada’s pre-eminent historians, A.B. McKillop has restored to life a unique tale of heroism and intrigue, obsession and betrayal. The novelist and social prophet H.G. Wells had a way with words, and usually had his way with women. That is, until the philandering author encountered the feisty Toronto spinster, Florence Deeks. In a half-million-dollar legal action launched in 1925, she claimed that in an act of “literary piracy” Wells had somehow come to use her unpublished history of the world in the writing of his best-selling book, The Outline of History. Thus began one of the most extraordinary cases in Anglo-American legal history. The Spinster and the Prophet is a rivetting literary detective story, and as Professor A.B. McKillop unravels this legal mystery he reveals that the verdict of the courts may not be that of history. The cast of characters he invokes is as intriguing as it is wide, in Canada, the United States, and England – eminent lawyers and judges, renowned publishers and editors, prominent professors, members of the Judicial Committee of the Privy Council and ordinary office secretaries. Above all, the story involved the very different lives of Mr. Wells, his wife and his mistresses, and of Miss Florence Deeks, her family, and her search for justice.In carrying out this work, A.B. McKillop places legal history in the finest tradition of historical narrative. By adopting the method of telling in tandem the intertwined stories of Florence Deeks and H.G.Wells he develops those stories in the context of several exciting themes which illustrate how the values and prejudices of the day moved forcefully and decisively into the courtrooms of Canada and the British Empire. Most important, perhaps, is what Deeks v. Wells reveals of the respective places in contemporary society of men and women. In doing so Professor McKillop gives Florence Deeks a voice which was denied to her by the patriarchal society of her day. In this sense, many readers may conclude that, however belatedly, a measure of justice finally has been done for the courageous Toronto spinster Florence Deeks.

Finalist for the Governor General's Literary Award for Nonfiction 2000

Winner of the City of Toronto Book Award 2001

Winner of the Arthur Ellis Award for Best Non-Fiction 2001

Finalist for the Charles Taylor Award for Literary Non-Fiction. 2002

Winner of the UBC Medal for Canadian Biography 2001

Finalist for the Drainie-Taylor Prize for Biography 2001

Reviews of The Spinster and the Prophet: Florence Deeks, H.G.Wells, and the Mystery of the Purloined Past

[A.B. McKillop] grants Deeks, belittled by Wells' supporters as a 'light-minded', and angry 'spinster', a manner of historical justice that the law and the press were unwilling and unable to give at the time of her trial. Daniel Nasaw, New York Times Book Review, January 5, 2003

Combining the rigour of a professional historian with the pacing of a thriller writer...he tells ...a fascinating story and in doing so casts new light on Wells, while also giving a little bit of the history of Canadian publishing and revealing many ironies. The Economist, February 3, 2001

Alexander Brian McKillop is a Chancellor’s Professor at Carleton University and the former Chair of the Department of History (2005-2009). His research interests are focussed on intellectual and cultural history, including religion, higher education, elite and popular culture, cultural production and expression, and historiography, as well as the biography of Pierre Berton. Professor McKillop has… Read more » 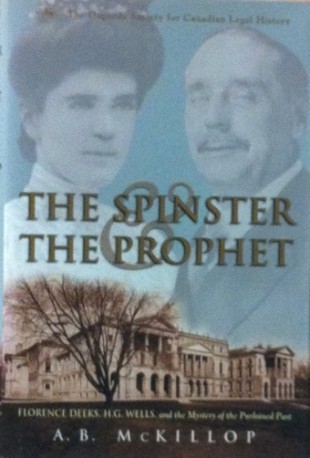