by Jerry Bannister, Professor of History, Dalhousie University. Published with the University of Toronto Press, 2003.

The past two decades have witnessed a remarkable expansion in the study of the trans-Atlantic links of the British empire. This wave of historiography has passed by Newfoundland. Although most scholars acknowledge the role of the cod fishery in the Atlantic economy, Newfoundland is usually neglected or simply omitted from studies of the first British Empire. Early popular histories created enduring stereotypes which unduly emphasized the island’s lack of social and governmental structures, particularly the alleged weaknesses of Anaval government. With few exceptions, historians still see eighteenth-century Newfoundland through the lens of cultural exceptionalism as an isolated backwater cut off from the mainstream of Atlantic commerce and politics. In this original and perceptive work, Professor Bannister requires us to rethink much of what we know about early Newfoundland history. By addressing the issue of how the island was governed in the 130 years prior to the establishment of an elected assembly, and by placing his analysis firmly within the material conditions of Newfoundland society, he provides a striking reinterpretation of a critical period in the island’s colonial development.

Reviews of The Rule of the Admirals: Law, Custom, and Naval Government in Newfoundland, 1699-1832

Jerry Bannister’s book received the Canadian Historical Association’s Sir John A. Macdonald award in 2003. That a book examining naval government in eighteenth-century Newfoundland should receive this honour is an indication of its quality and of its impact both on Newfoundland historiography and on legal history within the British Empire. Bannister's well written analysis of eighteenth-century Newfoundland society opens up a number of avenues for historians interested in colonial comparisons, (including) his intriguing exploration of the role of customary law in naval government.  David Murray, American Historical Review, Vol 110, 2005, p. 259.

In a study that takes legal history as a lens through which to examine not only the processes of law themselves but also wider issues of governance and the negotiation of authority, Bannister makes a convincing case that Newfoundland was neither anomalous nor backward in an empire characterized by diversity.  J.G. Reid, Journal of Imperial and Commonwealth History, Vol 32, 2004, p. 142.

The Rule of Admirals is a model of historical scholarship, whose significance goes well beyond the Eastern Shore of Newfoundland and will be appreciated by all students of the early British Empire.  Luca Cordignola, University of Toronto Quarterly, Vol 75, 2006, p. 265.

Jerry Bannister is an Associate Professor of History at Dalhousie University. He has researched and published several books and articles on British North America with an emphasis on Newfoundland and the Atlantic. His work has earned him several accolades including the Sir John A. Macdonald Prize of the Canadian Historical Association for the best book… Read more » 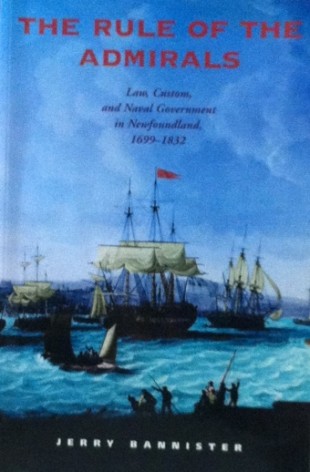 LIST OF TABLES, ILLUSTRATIONS, AND APPENDICES ix
FOREWORD xi
PREFACE xiii
ACKNOWLEDGMENTS xvii
1 Introduction 3
2 The Fishing Admirals System 26
3 An Unruly Set of People: The Struggle for Judicial Authority 64
4 The Establishment of Naval Government 104
5 A Fief of the Admiralty: Newfoundland under Naval Rule 141
6 Using Mercy and Terror: The Patterns of Criminal Justice 187
7 Enforcing the Social Order: Punishment in a Fishing Society 222
8 The Fall of Naval Government 256
9 Conclusion 280