Brian Young interprets codification as part of a larger process that included the collapse of the Lower Canadian rebellions, the decline of seigneurialism, the expansion of bourgeois democracy in central Canada, professionalization of the bar, and formation of the institutional state. Central to codification was a profound ideological shift in Lower Canadian society that gave priority to exchange and individual property rights. Young examines the evolution of codification from its nationalist origins in the 1820s and 1830s into a Civil Code that was integral to Confederation and became a flagship of bilingualism in Quebec. The formation of the commission, the work of the codifiers, and the reaction of the anglophone minority and the Roman Catholic hierarchy are considered, as is the Code’s meticulous blending of a conservative social vision with the principles of freedom of property.

Reviews of The Politics of Codification: The Lower Canadian Civil Code of 1866

The Politics of Codification is one of the best books yet produced in the field of Canadian legal history. Thoroughly researched and cogently argued, it is a model of how the internal history of the law can be written with reference to a broader context.... Young's book deserves a wide audience, not only of legal historians but also of those whose primary interest is in other fields. It shows us that law matters, and that it both responds to broader forces and shapes the terms on which larger transformations take place.  Jim Phillips, Canadian Historical Review, vol 78, 1997, p. 236.

This book offers a remarkable synthesis of the codification of the civil law of Lower Canada....Young has successfully illustrated the unique political situation in which codification was achieved, described the diverging interests present during this period, and explained the ideological stakes underlying this project. For these reasons, the study constitutes an important contribution to Quebec legal historiography.  Sylvio Normand, American Journal of Legal History, vol 40, 1996, p. 391.

Young must be commended for setting forth a rather complicated and oftentimes involved subject in a clear, readable form.... This book provides an engrossing read.  Kenneth Munro, Literary Review of Canada, July-August 1995, p. 293.

Brian Young is Professor Emeritus in the Department of History and Classical Studies at McGill University. He taught history at McGill from 1975 until his retirement in 2009. His research interests centre on the social and cultural experience of the nineteenth-century Quebec elite. He is also a founding member of the Montreal History Group, a… Read more » 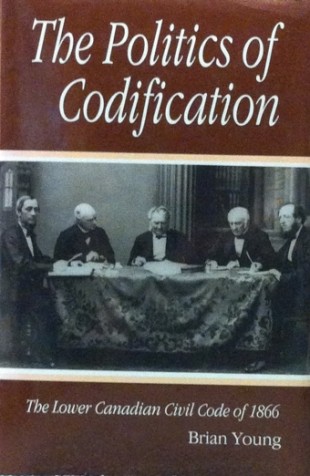