by Mr. Justice Robert Sharpe of the Court of Appeal for Ontario and Patricia McMahon, Osler, Hoskin & Harcourt LLP. Published with the University of Toronto Press, 2007.

The Persons’ Case is one of the best known Canadian constitutional cases, both for the fact that it declared women to be ‘persons’ for the purposes of eligibility for Senate appointment, and for Lord Sankey’s invocation of the living tree metaphor in interpreting the constitution. Robert Sharpe and Patricia McMahon add enormously to our understanding of the case by a detailed exploration of its context. They analyse the campaign for the recognition of women as senators in both political and legal circles, and they examine the background and personalities of the major players in the litigation, in particular Lord Sankey, Prime Minister Mackenzie King, and Emily Murphy. Murphy, one of the ‘famous five’ litigants, was the driving force behind the demand for legal recognition, and she is shown here to be a fascinating and complex individual.

Reviews of The Persons Case: The Origins and Legacy of the Fight for Legal Personhood

One of the most compelling reasons to read The Persons Case is to find out what drove the women known as the Famous Five to fight to open the Senate's doors. Readers also discover why the verdict remains one of the most important constitutional decisions in Canadian history..... [A] gripping drama in which the fitness of women's appointment to the Senate is merely the backdrop.... Reading history should always be this much fun. Penni Mitchell, The Beaver, June-July 2008

There is much that is engaging in this account of the Persons case, particularly in relation to the five women who requested the constitutional reference, and the behind the scenes political manoeuvres of Prime Minister Mackenzie King and his advisors... In addition the study situates the case within the ongoing tensions with respect to constitutional interpretation between judges in the Supreme Court of Canada on one hand and in the Privy Council on the other. Mary Jane Mossman, Ottawa Law Review, vol 40, 2009

Patricia McMahon is the coordinator and lead interviewer of the Osgoode Society’s Oral History Program. She is a lawyer and historian living in Toronto. Dr. McMahon holds a Ph.D. in History from the University of Toronto and a J.S.D. from Yale Law School. Her Ph.D. dissertation examined the influence of public opinion on Canada’s nuclear… Read more » 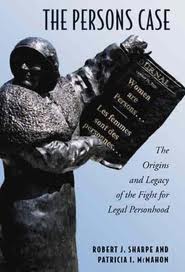 Introduction: ‘A Relic of Days More Barbarous Than Ours’ 3
1 First of the Five 16
2 The Other Four 37
3 Women and the Law: The Trials of Legal Personhood 59
4 Emily Murphy’s Senate Campaign 74
5 Going to Court 104
6 The Supreme Court of Canada Decides 127
7 The Judicial Committee of the Privy Council and the
Canadian Constitution 142
8 Waiting to Be Heard 154
9 The Judicial Committee of the Privy Council Decides 173
10 The Political, Cultural, and Legal Legacy of the
Persons Case 189