Just before the outbreak of the American Civil War, a sensational case was heard in Toronto which captured headlines throughout North America and Europe. John Anderson, a fugitive slave who had been living quietly near Brantford, Ontario, was accused of having killed a white man in Missouri in 1853. The American government demanded that Anderson be extradited, and the ensuring legal proceedings created a storm of controversy in Canada. The Odyssey of John Anderson is a compelling reconstruction of one of the most remarkable legal encounters in pre-Confederation Canada. Patrick Brode’s account captures the drama of this exciting case and considers as well its larger political and legal implications. This book is an important contribution to the historical study of law and politics in Canada, and will be read with enjoyment and fascination by all.

Reviews of The Odyssey of John Anderson

A compelling reconstruction of one of the most remarkable legal encounters in pre-Confederation Canada..... A study that places the Anderson case in its proper place in Canadian history.  Robert C. Reinders, Journal of American History, vol 79, 1992, p. 665. 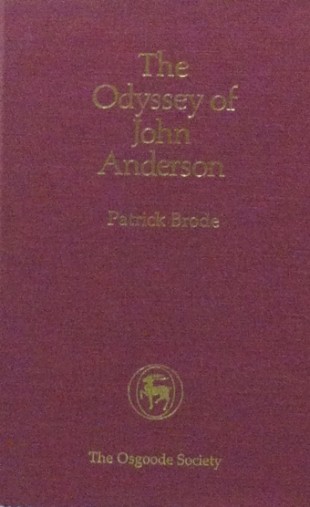