In 1915 Carrie Davies, an 18-year old servant girl in the home of Charles (Bert) Massey, scion of the famous Massey family, shot and killed her employer as he entered his house after work. Remarkably, she was acquitted, and award winning popular historian Charlotte Gray explains how this happened. Vividly recreating the war time atmosphere, a press war, and conflicts over crime and gender, she highlights the role played by the defence lawyer who exploited the “unwritten law” of an honour killing in a rare Canadian case of jury nullification.

In January 2014 Charlotte Gray’s The Massey Murder: A Maid, her Master and the Trial that Shocked a Nation was one of 5 books nominated for the RBC Taylor Prize for 2014, awarded for the best non-fiction book of the year.

The Massey Murder examines a near century-old slaying …. [I] is also a captivating read, balancing intense research with richly drawn characters and lively storytelling…. In many ways The Massey Murder isn’t just about the trial of Carrie Davies but that of Toronto’s status quo, and indeed, the nation.’ Rebecca Caldwell, Maclean’s, 20 September 2013

The Massey Murder is very much in the vein of Charlotte Gray, whose histories have included biographies of Susanna Moodie, Pauline Johnson, and Alexander Graham Bell. This book … is a work of history, albeit with a strong narrative bent… The departure from previous works consists of her choice of subject. Whereas her previous subjects were individuals of some importance Gray has always wondered about forgotten lives …., ‘the long dead individuals who left no record behind them’…. The case of Carrie Davies provided just such an opportunity to inquire into  forgotten life.’ Philip Marchand, National Post, 13 September 2013

Charlotte Gray is one of Canada’s best-known writers, and author of ten acclaimed books of literary non-fiction. Born in Sheffield, England, and educated at Oxford University and the London School of Economics, she began her writing career in England as a magazine editor and newspaper columnist. After coming to Canada in 1979, she worked as… Read more » 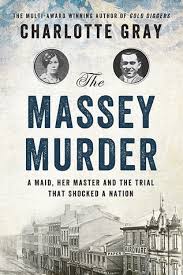 Part One: The Story

4 The Muscle of the Masseys 53