The Laws and the Land is a history of the relationship between Kahnawà:ke and Canada. It is the story of land and law set in the territory of the sovereign Kanien’kehá:ka nation near Montreal, focused on the colonial tactics of the expanding settler state of Canada over the course of the nineteenth century. The book is a history of the asymmetrical encounter between Kahnawà:ke law and Canadian “Indian laws”, in the context of Confederation, the Indian Act, Indigenous history, and the global history of settler colonialism. Using extensive archival research, this book reveals an increasingly powerful and belligerent Canada interfering in the governance of Kahnawà:ke, one of the most populous and influential Indigenous communities in nineteenth-century Canada. Yet the colonial invader described in this book is not simply a well-organized, irresistible machine; it was also a colonizing bureaucracy wracked by contradiction, inconsistency, and weakness, which themselves become sources of oppression for colonized people. This is the story of the meeting of two legal traditions in a settler colonial context, and the lawlessness and violence that emerges from the colonization process.

REVIEWS OF THE LAWS OF THE LAND: THE SETTLER COLONIAL INVASION OF KAHNAWÀ:KE IN NINETEENTH – CENTURY CANADA

In The Laws and the Land: The Settler Colonial Invasion of Kahnawà:ke in Nineteenth-Century Canada Daniel Rück presents a richly detailed and sophisticated history of land use rights and ownership on the Kahnawà:ke reserve over the course of a century. To some extent it is a specialized study that will be most welcomed by scholars with a deep knowledge of land laws. However, it should also be of broad appeal to anyone immersed in an examination of Indigenous-settler relations in this critical period of continual change. Morever, The Laws and the Land has considerable utility for the legal profession in the sense that it unravels the fluid nature of Indigenous-colonial relations and ever evolving nature of Indigenous communities.  Bill Parteneau, NiCHE- Network in Canadian History and Environment, July 2022. 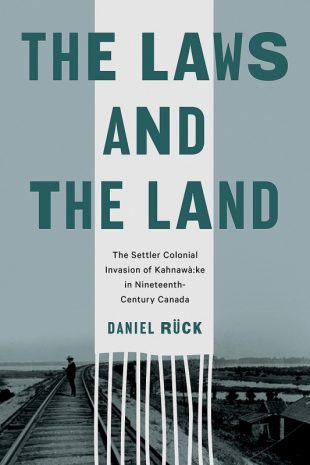