The Torrens system of land titles registration was introduced to what is now British Columbia in the mid-nineteenth century, and later spread to the rest of western Canada and to Ontario. In telling the story of the various receptions of the system, this book explains why it was considered such an improvement on the previous method of land registration, and why in addition it took so long for the reform to win public acceptance in some provinces. This is a fascinating account of interest groups and the reform of Canadian private law, one that demonstrates how the different histories of the various parts of Canada have shaped, and continue to shape, their law.

Reviews of The Law of the Land: The Advent of the Torrens System in Canada

Dr. Taylor ... has done an admirable job in making the story of Torrens in Canada come to life in an authoritative ... exploration of the subject.... Dr Taylor describes the drivers behind the adoption of the particular brand of Torrens in each of the provinces or regions. It is an engaging review that showcases the author's attention to detail and gift for tying salient facts together. Mark Coffin, Dalhousie Law Journal, vol 31, 2008

Taylor's work is a positive addition to the area of property law in Canada. It outlines how Torrens came to be and the current status of land titles in Canadian jurisdictions. The Law of the Land will primarily interest scholars of legal history and property law, [and] legal practitioners.... Indeed anyone working with land titles in a Torrens system should find this publication useful .... To illustrate this book's impact, our library's copy quickly circulated to four people since it arrived, two of whom had to recall the book! Nadine Hoffman, Canadian Law Library Review, vol 34, 2009, p. 197

Dr Greg Taylor is Professor of Law at RMIT University, Melbourne, Australia where his chief interest is constitutional law. He previously taught at Monash University in Melbourne. He has previously been a Visiting Professor at Mannheim University in Germany (2003-2004), a lecturer at the Law School at the University of Adelaide (1999-2003) and an Associate… Read more » 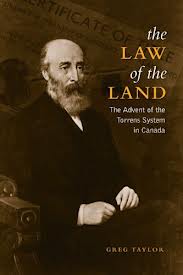 9 Quebec, the Maritimes, and Newfoundland and Labrador 155
10 Concluding Remarks 162