by Desmond Brown. Published with the University of Toronto Press, 1989.

In 1892 the Canadian Parliament enacted the Criminal Code. Drafted in just over a year by a justice department consisting of fourteen men occupying six offices, it was the first such code to be enforced in a self-governing jurisdiction in the British empire. As such, the code was a revolutionary development in the common-law world, for both the existing statute and common law were integrated in a rational and systematic format. The impact of the legislation was far-reaching. It changed the focus of the development of the criminal law from the judiciary to Parliament and, as the Canadian Journal of Criminal Law points out, ‘it worked so well that not only did it serve as a model for legislators in other British jurisdictions but its form remains fundamentally unaltered despite changes in both law and the society it governed over the ensuing one hundred years. In The Genesis of the Canadian Criminal Code of 1892, Desmond Brown explains the origins of the Code in the context of the social and political circumstances of nineteenth-century Canada. This authoritative study of the events leading to the enactment of the Code adds significantly to our understanding of nineteenth-century Canadian legal processes.

Reviews of The Genesis of The Canadian Criminal Code of 1892

Desmond Brown is Professor Emeritus in the Department of History and Classics at the University of Alberta. His research and teaching focused on the history of Canadian criminal justice and he has written extensively on the history of criminal law in Britain and Canada. Dr. Brown has also done extensive scholarly consultation work. He has… Read more » 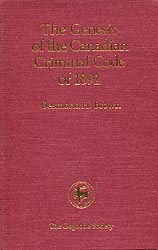 1 Definitions and Descriptions 6
2 Attempts to Codify English Criminal Law 12
3 The Origin and Development of Legal Systems in
British North America 38
4 Consolidation and Codification before Confederation 70
5 Preparation for Codification in Canada: The Revised
Statutes of Canada 92
6 The Criminal Code 120
7 Epilogue 149