by C. Ian Kyer And Jerome Bickenbach. Published with the University of Toronto Press, 1987.

Disagreements over legal education have by no means been restricted to Ontario or to the twentieth century. The nature of legal education was debated in many parts of Europe and North America in the course of the nineteenth century. As the century drew to a close, the issue assumed its modern guise as part of a wider process of adjustment of disparate middle-class elements to the forces of urbanization and industrialization. Disputes arose between university faculties and legal practitioners over who should be responsible for training new lawyers. More significantly, the very nature of legal education, became the subject of passionate debate.In Ontario, these difficulties assumed a unique form in response to the nature of provincial society and the conservative traditions of the Ontario legal community. The issue came to the fore somewhat later in Ontario than in other locales; it involved an extended struggle between a powerful and entrenched professional body and Cecil A. Wright, a man of great determination; and, ironically, it gave new substance to enduring tensions between the legal community’s pride in its British heritage and Wright’s single-minded efforts to introduce American ideas and methods to the study of law in Ontario. The Fiercest Debate is at once an analysis of a particular and specialized subject and a wider study of the forces of modernization and professionalization at work in a provincial society. Dr. Kyer and Professor Bickenbach offer a fascinating narrative that will engage the reader and shed light on the development of the professional traditions of those who teach and practice law in Canada.

Reviews of The Fiercest Debate: Cecil A. Wright, The Benchers And Legal Education In Ontario, 1923-1957.

This is a book of impeccable scholarship both in its understanding of the legal profession and legal concepts and in its presentation of historical causes and effects. It is meticulous in detail, exact in historical generalization, and careful in judgement of people, yet withal conveying a strong sense of the outside pressures that made progress inevitable.  Mark MacGuigan, Canadian Historical Review, vol 70, 1990, p. 139.

All those interested in the history, nature and quality of legal education in our country owe a vote of thanks to C. Ian Kyer and Jerome E. Bickenbach. And the same people owe it to themselves to read this book.  W.R. Lederman, Dalhousie Law Journal, vol 13, 1990, p. 465.

This is a very good book. The authors have succeeded in infusing an important episode in Canadian legal history with life and colour.  John McLaren, Canadian Bar Review, vol 68, 1989, p. 193.

Dr. Kyer practices information technology law at RPM Technologies. He has been ranked as one of the leading 500 Lawyers in Canada by the Canadian Legal Lexpert Directory. For several years he has been listed in the International Who’s Who of Internet and E-commerce Lawyers. He has also been rated twice as one of the… Read more »

Jerome Bickenbach is a professor in the Department of Philosophy and Faculties of Law and Medicine at Queen’s University. He holds a Queen’s Research Chair and was a previous holder of a Killam Fellowship, working on the law and policy of health systems performance assessment. His area of specialty is bio-ethics, philosophy of law and… Read more » 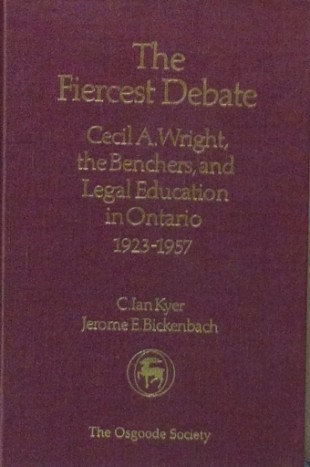