The book marks the 50th anniversary of the founding of the Federal Court of Canada in 1971 and assesses the contributions of the Federal Court and the Federal Court of Appeal to Canadian jurisprudence. The book’s 18 chapters include contributions by the four editors and eight collaborators, and a chapter each by Chief Justice Marc Noël and Chief Justice Paul Crampton. The sources used include extensive interviews with sitting and retired judges and prothonotaries from both Federal Courts. The book includes chapters on each of the courts’ specialties – administrative law, immigration and refugee cases, intellectual property, security intelligence, Indigenous law, environmental law, admiralty, labour and human rights, and tax, as well as overviews of the history of the court, its personnel, etc. The volume sheds new light on two of Canada’s most important, but least recognized, courts. 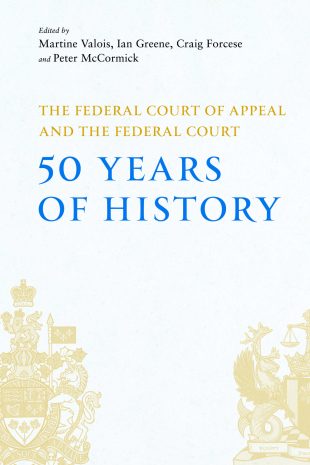