This study of the Manitoba judiciary is the first complete biographical history of a provincial bench. The relative youth of Manitoba and the small size of its legal profession makes possible an exceptionally detailed investigation of the background of those appointed to the province’s highest trial court – the Court of Queen’s Bench. This book shows the close connections in the early days between the Ontario bar and the judges of the new province, and highlights the political nature of the judicial appointment process, especially in the period prior to 1950. But it also suggests that in addition to politics and legal ability, many lawyers became judges because they more than others had made themselves known in the communities in which they practised. These biographies of the first thirty-three men appointed to the Court of Queen’s Bench highlight the extent to which the members of the legal elite shared remarkably similar views and ways of thinking. The collective biography approach also allows a remarkably intimate look at personalities ranging from prime ministers to senior government officials to members of the practising bar.

Reviews of The Court of Queen’s Bench of Manitoba 1870-1950: A Biographical History

[This book] offers opportunities to reflect on the creation of a distinct ... Canadian law..... Manitoba is particularly well-suited to such a study ....Brawn uses the biographies [of the judges] to place judges within their historical context.... As Brawn makes clear, ... judges have ... played central roles in Manitoban and Canadian political history. James Muir, Alberta Law Review, vol 45, 2007.

His research has been prodigious...the result is a full and fascinating history. Through the lives of the judges, we realize how early Manitoba was seen as the frontier of opportunity, beckoning young lawyers from the East... The biographies are full and candid...supplemented by an informative introduction and other notes that, together, form the best available short introduction to the history of the court... A valuable new addition to the short shelf of works on Manitoba's legal history. Trevor D. Anderson. Headnotes and Footnotes: The Manitoba Bar Association Newsletter, Vol. 37, No. 10, December 2006

Brawn's story is not simply about the Manitoba bench and bar, but about the making of law and order in a country moving from a frontier to a modern, urban society.... Brawn's biographical sketches are entertaining as well as offering interesting glimpses into the making of Canadian law and the legal community...Brawn will introduce you to some good stories, open up Canada's legal past and perhaps even having you questioning the justness of the legal system built here. James Muir, The National Post, Wednesday, Dec. 20, 2006.

Dale Brawn is an Associate Professor in the Department of Law and Justice at Laurentian University. He teaches many legal courses including: Public Law, Environmental Law, Property Law, Labour Law, Rights and Law, Great Trials, and Racism & Law. See also: Laurentian University Department of Law and Justice. Dr. Brawn can be reached at dbrawn@laurentian.ca…. Read more » 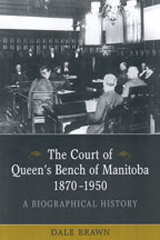