edited with an introduction by Peter N. Oliver, Professor of History, York University. Published with the University of Toronto Press, 2003.

Between 1856 and 1878, the year of his death, Robert A. Harrison, a Toronto lawyer, often described as the outstanding common law lawyer of his generation in Canada and Chief Justice of Ontario in the late 1870’s, kept a diary.
The Harrison diary is one of the most remarkable documents bequeathed to us by the nineteenth century. In it Harrison provides detailed and intimate accounts of life and love among Toronto’s upper crust, accounts which resound with ambition, passion, jealousy and rage as his life proceeds through courtships, marriages, deaths and all the throes and challenges of routine existence among Toronto’s privileged classes. Not least important are the behind-the-scenes insights into hundreds of courtroom battles fought before judges sometimes described as ignorant and thick-headed and juries who frequently succumbed to Victorian prejudices of race, gender bias and religion.
Although unusual in his driving ambitions and his consuming need to accumulate a fortune, Robert Harrison remained in most respects thoroughly conventional and Victorian and his diary offers unrivaled insights into the voice of the mid-nineteenth century Toronto male: confident, conventional and smug.
In Robert Harrison’s private diaries, history is personal and alive. In an extended biographical introduction Peter Oliver provides an explanation and a critical assessment of one man’s extraordinary life in Victorian Toronto.

Reviews of The Conventional Man: The Diaries of Ontario Chief Justice Robert A. Harrison, 1856-1878

Beyond providing insight into the life and thought of one prominent Ontario lawyer, the often detailed accounts of everyday life offer an entry point into, among other things, elite religious practices, the relationship between elites and working-class men and women, gender relations, and, not surprisingly, the worlds of late-nineteenth century law and politics in Ontario. Oliver has done an admirable job of presenting and making accessible a valuable document. These selections from the Harrison diaries will undoubtedly figure into the works of social, political, and legal historians in the future.  Kurt Korneski, H-Net Canada Reviews, 2004.

For those interested in the history of the law and the legal profession, the diary is a valuable addition to the existing repertoire of primary sources.... [I]t is a treasure ... for social historians. For anyone interested in the history of Victorian masculinity, sexuality, marriage courtship, and familial relations, this diary is a goldmine. If Harrison is conventional in many of his attitudes, as Oliver notes, he is seldom uninteresting.  Philip Girard, Social History-Histoire Sociale, Vol 38, 2005, p. 535.

Professor Oliver was a Professor of History at York University for over 40 years, beginning as a full time lecturer in 1965. His work focused mainly on the political and legal history of Ontario in the 19th and 20th centuries, as well as correctional history and penology. He was noted for his work on a… Read more » 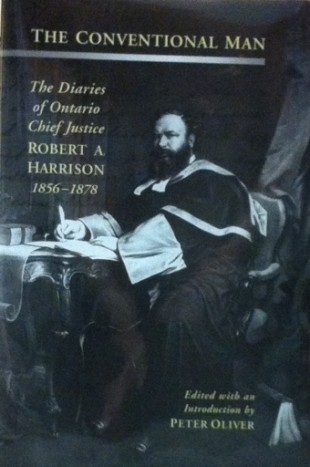