by Christopher Moore, Independent Historian. Published with the University of British Columbia Press, 2010.

The Court of Appeal of British Columbia began sitting in 1910, and this volume thus coincides with the court’s centenary. Renowned historian Christopher Moore has produced a masterful account of the court, one that combines narrative, biographical and analytical histories of a major provincial judicial institution over one hundred years. Anchored by rich detailed studies of the court’s judges, it provides also extensive data on court organisation, administration, and caseload. Each chapter also includes vignettes of famous and unusual cases dealt with by the court, as well as commentary on the ways in which the court’s work both reflected and influenced the province’s history. This book is the Osgoode Society’s fifth court history, and we hope that it will serve as both inspiration and model for many other histories of our country’s courts.

Reviews of The British Columbia Court of Appeal: The first hundred years

For scholars, judges, lawyers, and general readers, Moore, a writer of Canadian history and author of books on legal history, provides a history of the British Columbia Court of Appeal from 1910 to 2010. He presents an institutional, jurisprudential, and biographical account of the court and its role in the province, including how it evolved, how it has operated, its judges, and how it has shaped and has been shaped by the social, political, and legal development of the province. He includes biographical sketches and b&w photos of judges, exploration of significant cases, administrative and procedural history, the issues facing judges, and the evolution of legal thinking Book News, Inc., Reference and Research Book News, May 2010. 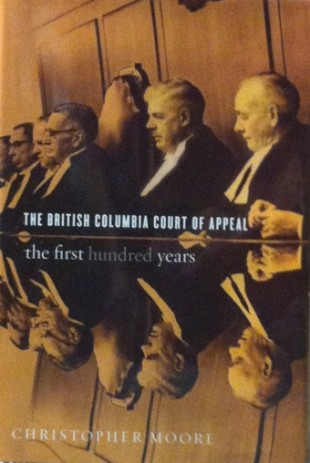