by Brendan O’Brien. Published with the University of Toronto Press, 1992.

This is at once a legal-historical work of major interest and an exciting re-creation of the famous 1804 Lake Ontario shipwreck. The ship was sailing from Toronto to Eastern Ontario for the Assizes. As dusk descended on the lake, anxious watchers huddled near a bonfire on Presqu’ile Point saw the Speedy struggling to make port in the teeth of a northeast gale which carried it away into the waves and darkness. It did not return and was never seen again. On board were a number of leading members of the Upper Canadian legal establishment as well as a black slave, two children of indigent parents who were unable to afford passage for themselves and Ogetonicut, a Chippewa Indian who faced a charge of murder and was in the custody of his jailer. Most mystery stories, Mr. O’Brien writes, “have heroes and villains. This one is no exception. The villain turns out to be the Governor, Lieutenant General Peter Hunter.”

This book is out of print.

Reviews of Speedy Justice: The Tragic Last Voyage of His Majesty’s Vessel Speedy

The Speedy’s disappearance was never officially investigated. In unofficially taking the job upon himself, Brendan O’Brien revivifies a brief period in the social, political and cultural life of 19th-century Upper Canada.  Kathleen Byrne, Globe and Mail, January 27, 1993, p. C4.

The late Brendan O’Brien was a distinguished lawyer whose years of practice focused mainly on civil litigation. His career spanned six decades, beginning with his graduation from Osgoode Hall (1932). Mr. O’Brien began as a junior with the firm of Phelan and Richardson, rising to become a Senior partner before the firm’s merger with Aylesworth… Read more » 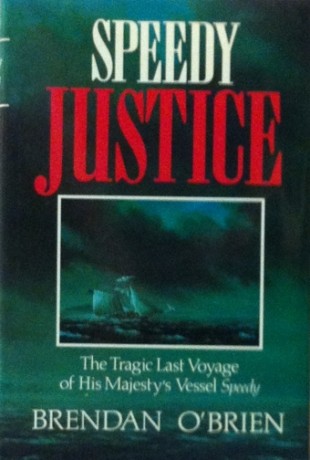