by Patrick Brode, Legal Counsel, City of Windsor. Published with the University of Toronto Press, 1984.

It is appropriate that Patrick Brode’s biography of Sir John Beverley Robinson was published in the year that marked the 200th anniversary of the coming of the loyalists to British North America. Robinson, as Patrick Brode demonstrates, embodied much of the loyalist tradition and worked to give form to important aspects of that tradition in the body politic of Upper Canada. In many respects, Brode argues, Robinson’s achievements in this regard fell short of his aspirations; yet the efforts of Robinson and of like-minded Upper Canadians had important consequences for the future development of Canadian institutions in general and the nation’s legal heritage in particular. John Beverley Robinson was, arguably, the greatest Upper Canadian, and Patrick Brode offers a thoughtful and effective study of a career that had few if any parallels in the societies of British North America. The Osgoode Society is pleased that this book has involved the participation of a practising member of the legal profession in the writing of Canadian legal history, and it is hoped that other members of the profession may see fit to emulate Patrick Brode’s example.

Reviews of Sir John Beverley Robinson: Bone and Sinew of the Compact

Brode has achieved a lasting work; in rescuing Robinson from the unjustified obscurity and opprobrium of liberal historiography, Brode's book itself illustrates the internal connections between scholarship, law and politics. Barry Cooper, Canadian Journal of Law and Society, vol 1, 1986

What the author adds to research skill is a careful vivacious pen and an innate ability to tell a good story well. The book is a pleasure to read and a model for future legal biography. DeLloyd J. Guth and F. Murray Greenwood, Osgoode Hall Law Journal, vol 24, 1986 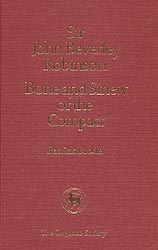