by Fred Kaufman, Quebec Court of Appeal, retired. Published with the University of Toronto Press, 2005.

As one reviewer wrote, this is a ‘a tale well told of a remarkable life well lived.’ Born into a middle-class Jewish family in Vienna in the mid-twenties, Kaufman managed to leave his native city on one of the last trains to freedom before the outbreak of World War II. He found refuge in England, but in May 1940, along with thousands of others, he was interned as an enemy alien and sent to Canada. He was released in 1942, went to school and then to university, and found employment as a reporter with the Montreal Star. Fascinated by the lives of famous lawyers, he entered law school in 1951. He was called to the Bar of Quebec in 1955, having stood first in the Bar Admission Course. He practiced criminal law for 18 years, taking part in many of the famous cases of that period. In 1973 he became the first criminal lawyer to be appointed to the Quebec Court of Appeal, where he served with distinction for 18 years. After his retirement in 1991, he led the Commission which examined the wrongful conviction of Guy Paul Morin, an inquiry into the Public Prosecution Service of Nova Scotia, an inquiry into Nova Scotia’s Compensation Scheme for victims of abuse in residential schools, and an examination of safety issues in Ontario’s nuclear plants. He also completed a two-year investigation of the merits of Steven Truscott’s application to have his 1959 conviction for murder re-opened. Kaufman’s ‘monumental’ 700-page report resulted in an order by the Minister of Justice to refer the case to the Court of Appeal. His book is a fascinating story of adversity overcome.

Reviews of Searching for Justice: An Autobiography

Searching For Justice is infused with Kaufman's love for his adopted homeland. Canada gave him his freedom and recognized his talents. And in return he repaid Canada by his estimable public service. Irving Abella, Canadian Historical Review, Vol 87, 2006, p. 503.

The contribution of this memoir lies more in history than in literature, from someone who eschewed flashy manoeuvres and media grandstanding. Rather, Kaufman carefully, unflaggingly and courageously sought justice for the victims of crime, for those who perpetrated them and, especially, for the wrongfully convicted. Philip Girard, Literary Review of Canada, June 2010.

[A] remarkable autobiography that is inspiring and insightful... Searching For Justice is remarkable for the courage and determination displayed by this distinguished Canadian in overcoming obstacles of language, culture, and separation from family and friends to forge a mark of personal accomplishments visible at the national level. Justice Gilles Renaud, For The Defence, 2007

The Honourable Fred Kaufman is a distinguished figure in Canadian law. In 1992, Mr. Kaufman was appointed Member of the Order of Canada. He is a special Fellow of the Academy of Humanities and Social Sciences of the Royal Society of Canada and an Honorary Life Member of the Canadian Judges Conference. Mr. Kaufman was… Read more » 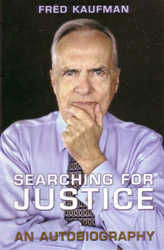