by Thomas Telfer, Faculty of Law, University of Western Ontario, published by the University of Toronto Press, 2014. $45, student price $20.

Professor Telfer’s deeply researched book shows that between Confederation and 1919, when the federal parliament passed the Bankruptcy Act that remains the basis of the current law, Canadians debated insolvency law with a perhaps surprising amount of passion. The discharge raised deep issues of commercial morality, while arguments about priorities pitted local against regional and national interests. Federalism complicated the story, as it often does in Canadian legal history, as the federal parliament abandoned its jurisdiction over bankruptcy for decades.

REVIEWS HAVE APPEARED IN THE FOLLOWING:

Reviews of Ruin and Redemption: The Struggle for a Canadian Bankruptcy Law, 1867-1919

‘Telfer has produced the foundational study of the nascent and still enduring resolution of [the problem of insolvency] for Canada. Telfer’s masterful exegisis takes us from Confederation in 1867 to .… the passage of the Canadian Bankruptcy Act of 1919…. Telfer’s monumental study is the definitive explanation’ [of the history of Canadian Bankruptcy law.]’ Charles Tabb, Law and History Review, Vol , 2015.

Telfer combines traditional legal history with social historical techniques and engages theories of the state and regulation. The work straddles the disciplinary boundaries of history and law… One of the real strengths of Telfer’s work is his examination of county court records in both rural and urban Ontario. His calculation of rates of voluntary proceedings under the 1869 act is revealing, and his discussion of individual cases helps to put faces to bankrupts, telling stories that umanize and render more comprehensible high-level political debate…. Ruin and Redemption is a valuable addition to the excellent catalogue of the Osgoode Society for Canadian Legal History. Daniel Simeone, Canadian Historical Review, Vol 96, 2015

The book makes itself readily accessible to a non-scholarly audience while remaining uncompromisingly meticulous concerning its detail and legal insight. Law students, professors and those interested in Canadian history generally can all take away something of value from this book. Telfer's analysis is easy to follow and … [n]o legal background is required to derive insight from reading this book. Ruin and Redemption fills a void in the history of Canadian commercial law. It takes a topic that would seem uninteresting to a non-legal reader and immerses them in a historical examination of a specific time and place and how it was impacted by, and shaped the reform of, bankruptcy law generally. It shows how a multiplicity of different factors can play a role in legislative change. Sean Tessarolo, Saskatchewan Law Review, Vol 78, 2015 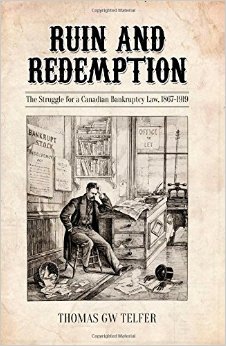