J.L. Cohen, one of the first specialists in labour law and an architect of the Canadian industrial relations system, was a formidable advocate in the 1930s and 1940s on behalf of working people. Cohen is best described as a ‘radical lawyer.’ He was very much a ‘labour intellectual,’ comparable to the powerful group of lawyers supporting Roosevelt’s New Deal in the United States. In this tradition, he wrote Collective Bargaining in Canada, advised the Ontario government about policy issues such as mothers’ allowances, unemployment insurance legislation and labour law, and served on the National War Labour Board during World War Two.

A Marxist and a Jewish immigrant, Cohen’s commitment to the labour movement resulted partly from this background but was deepened by his experience of the Depression of the 1930’s; his ethnic origins and politicial views subjected him to ongoing discrimination. Although respected professionally, he had a knack for making enemies. At the end of the war, he was convicted of a criminal charge, was disbarred, later reinstated and died suddenly in 1950 at the age of fifty-three. Although Cohen rose to the top of his profession, he had an agonizing private life which contributed to this personal disgrace and professional downfall. His obituary in the Globe & Mail described him as a dynamic, sharp-witted man who rose from humble beginnings to become the most influential labour lawyer in Canada. It concluded with what may be a fitting epitaph, ‘He championed all the wrong people for all the right things.’

Reviews of Renegade Lawyer: The Life of J.L. Cohen

This is a richly detailed study not only of a man but of a period. Through the troubled, highly complex life of a radical labour lawyer, readers get a birdseye view of the parlous status of workers and minorities in Canada in the years between the two world wars. This is a book not only to be read but to be savoured. Irving Abella, American Historical Review, vol. 108, 2003, p. 819

Macdowell is an informed and even-handed guide to Cohen and the legal issues he engaged... Fully researched and cogently argued, this study is likely to be definitive. Gordon Dueck, University of Toronto Quarterly, vol 74, 2004-2005, p. 493

Renegade Lawyer is the best kind of biography. It is an exemplary work of history by a leading historian of industrial relations; a life and times history that explains more than it narrates.... Laurel Sefton MacDowell has succeeded brilliantly in presenting J.L. Cohen as a great, tragic Canadian who personified the legal struggle for human rights in Canada and paid a terrible price for his iconoclasm. Barry Cahill, Left History, n.d. 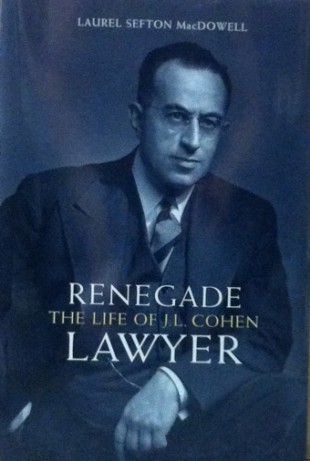