by Barrington Walker, Professor of History, Queen’s University. Published with the University of Toronto Press, 2010.

In recent years legal historians have been increasingly interested in the social history of the law and in the law’s impact on, among many other social phenomena, race relations. This ground-breaking study investigates the relationship between Ontario’s black community and the criminal courts from the mid-nineteenth to the mid-twentieth centuries. Using a sample comprised of capital case files and the assize records for Kent and Essex counties, counties with relatively large black populations because they were termini of the underground railroad, Professor Walker investigates the ‘limits of freedom’ for Ontario’s African Canadians. He contrasts formal legal equality with pervasive patterns of social, economic and attitudinal inequality. The records allow him not only to analyse attitudes of the dominant community, but also to provide rare glimpses into black life in the Canadian past

Barrington Walker ... presents fascinating and disturbing evidence of the 'state of paradox' in which Blacks lived in Canada.... Walker uses criminal case files to explore the experiences of poor, marginalized blacks..... [T]his book makes important contributions to our understandings of race and the law, illustrating the ongoing power of the tension between the veneer of the rule of law and biologically and culturally rooted ideas about race in Canada. Lori Chambers, Acadiensis, Vol 41, 2012, pp. 251-252

Walker questions whether, in some ways, history might be inadvertently repeating itself in courtrooms today, when there are calls for an offender’s cultural background to be taken into account when it comes to sentencing.” Tracey Tyler, “Equal but at times subhuman’: How Ontario’s justice system has treated blacks. Toronto Star, January 30, 2011.

Barrington Walker is Associate Professor in the Department of History at Queen’s University. His primary research interests are Black Canadian History, the histories of “race” and immigration. The idea for his book, Race on Trial, was born following the suspicion that hung over black men his age following a robbery in Toronto when he was… Read more » 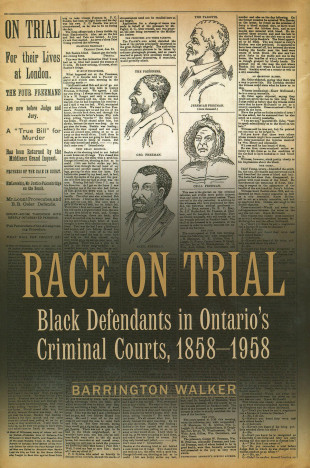 1 Blackness and the Law in Slavery and Freedom 24

2 Nationhood, Mercy, and the Gallows 45

5 Rape, Sex, and the Power of Dominant Rape Narratives 141