Frank Scott, Bora Laskin, W.P.M. Kennedy, John Wills and Edward Blake are among the better known figures whose thinking and writing about law are featured in this collection. This compilation of the most important essays by pioneer Canadian legal historian Dick Risk on the history of Canadian legal thought brings to light many other lesser known figures, whose writings covered a wide range of topics, from estoppel to the British North America Act to the purpose of legal education. Written over more than two decades, and covering the immediate post-Confederation period to the 1960s, these essays reveal a distinctive Canadian tradition of thinking about the nature and function of law, one which Risk clearly takes pride in and encourages us to celebrate.

A History of Canadian Legal Thought has much to offer almost any legal scholar. It will obviously be of particular interest, however, to constitutional scholars and teachers. Mark Carter, Canadian Bar Review, Vol 88, 2009, p. 193.

R.C.B. Risk has long been required reading for Canadian legal historians, and this essay collection demonstrates that he richly deserves a broader readership in Canada and elsewhere.... Risk presents the world from the perspective of lawyers and legal scholars, ... [but] their outlook offers insights into how Canadians perceived themselves, their relationship to the British Empire, their proximity to the United States.... These essays ... are fascinating.... Further, the essays retain the power to compel reflection. Jonathan Swainger, American Journal of Legal History, Vol 48, 2008, p. 467

Risk ... delves into our legal past, uncovering the trends and schools of thought that shaped legal scholarship throughout Canadian history..... [A] vivid picture of the development of legal thought in Canada.... [A]n enlightening trek through our legal past. [A History of Canadian Legal Thought] exposes the reader to the minds and events that shaped the transformation of legal thought in Canada. Thomas Collopy, Saskatchewan Law Review, Vol 70, 2007, p. 480

[This book] offers opportunities to reflect on the creation of a distinct ... Canadian law..... [Risk's] concern is with the broader intellectual milieu of Canadian law in the years following Confederation.... Risk writes in a disarmingly personal way, and seems at points to be simply reconstructing these older legal ideas for a modern audience. But these choices in writing belie a rigorous historical project as through these pieces, Risk is attempting to understand the intellectual origins of some of the most contentious elements of contemporary Canadian legal thought: rights, the powers of the state, and federalism. James Muir, Alberta Law Review, Vol 45, 2007, p. 287.

G. Blaine Baker was a Professor Emeritus at McGill University before his untimely death in 2018. Prior to joining McGill in 1981 he was a Bigelow Fellow at the University of Chicago Law School. During his time at McGill he served as Associate Dean (Academic) from 1999 to 2001 and Associate Dean (Graduate Studies) from… Read more » 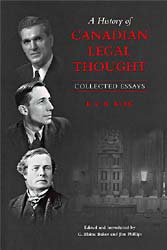 PART ONE
The Classical Age: Canadian Legal Thought in the
Late Nineteenth Century

3 Rights Talk in Canada in the Late Nineteenth Century: ‘The Good
Sense and Right Feeling of the People’ 94

PART TWO
The Challenge of Modernity: Canadian Legal Thought
in the 1930s

7 Volume One of the Journal: A Tribute and a Belated Review 211

8 The Scholars and the Constitution: POGG and the
Privy Council 233

12 On the Road to Oz: Common Law Scholarship about Federalism
after World War II 403