edited by Dr. Robert Fraser. Published with the University of Toronto Press, 1992.

This is an important reference guide and a highly entertaining book. In association with the Dictionary of Canadian Biography, which has published twelve monumental volumes dealing with Canadian lives from the year 1000 to 1900, we have selected some sixty biographies of Upper Canadian officialdom (both the judiciary and Crown officers), members of the bar, critics of the judicial system, and those who stood before it. Among those included are: Chief Justice William Campbell, William Warren Baldwin, a lawyer who claimed in 1821 that “there was no Society (referring to the Law Society of Upper Canada) for which the country should feel so deep an interest …. Without it, whose property was safe?,” Jacob Overholser (convicted of treason in 1814); Mary Osborn (the first woman executed in Upper Canada); Cornelius Burley (convicted of murder, his skull is now exhibited in a museum); Mary Thompson (whose conviction for infanticide in 1823 led to the reform of a notorious law), and many more. The volume is introduced by DCB editor, Dr. Robert Fraser, who places the biographies in their larger social and economic context. Fraser’s essay stands alone as a brilliant and often devastating analysis of the legal landscape of early Ontario.

Provincial Justice is a huge success: the book really works as both an introduction to and an analysis of the legal culture of Upper Canada.  Sidney L. Harring, Canadian Historical Review, vol 75, 1994. p. 291.

Robert Fraser is the Executive Director of the Dictionary of Canadian Biography at the University of Toronto and Academic Coordinator, History, Academic Bridging Program, University of Toronto. Dr. Fraser is also the Managing Editor of the Dictionary of Hamilton Biography, chair of the Historical Committee of the Argyll and Sutherland Highlands of Canada and president… Read more » 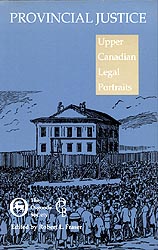 ‘All the privileges which Englishmen possess’:
Order, Rights, and Constitutionalism
In Upper Canada xxi

Officialdom: The Judiciary and Crown Officers

The Critics and the Causes Célèbres