Although the RCMP is often identified as a national symbol, Canadian police history is largely the story of municipal and provincial police forces which have had little influence on popular culture but considerable impact on the lives of Canadians. Municipal police forces predate the Mounties by a generation and first began to articulate their concerns through the Chief Constables’ Association of Canada (CCAC) in 1905. The development of this little-studied, non-governmental organization, known since the 1950’s as the Canadian Association of Chiefs of Police (CACP), has been a crucial part of our criminal-justice history.The CACP/CCAC story mirrors the social and intellectual history of policing in twentieth-century Canada. Beginning with an overview of nineteenth-century policing and the conditions that led to the establishment of this first police lobby, Policing Canada’s Century is a chronicle of police reaction to social change and the rise of new institutions, reform movements, and methods of managing the population. The biggest period of growth was from 1961 to 1975, coinciding with the maturation of the welfare state, when the number of police officers in relation to population increased by more than 50 per cent. The social change and legal reforms of the 1960s and 1970s caused CACP to reorganize and to found a permanent secretariat in Ottawa. This book is both a history of Canada’s major police professional association and an examination of twentieth-century police administration issues.

Reviews of Policing Canada’s Century: A History of the Canadian Association of Chiefs of Police

This book will be required reading for anyone who wants to understand police work in Canada. Marquis has written an encyclopaedic work, humorous in places, which will be a standard reference for queries in Canadian police work of any description.... It is fair to suggest that for at least a generation, Policing Canada’s Century by Greg Marquis will be a benchmark, the starting point from which others launch their attacks.  Graeme Mount, Literary Review of Canada, Vol 3, January 1994, p. 15.

This is a first-rate study of policing from the "top-down," one that not only provides a unique detailed account of policing policy in a decentralized state but which also will prove useful for those interested in the political culture of authority.  Jim Phillips, Law & History Review, vol 13, 1995, p. 174.

Dr. Marquis is a professor at the Department of History and Politics at the University of New Brunswick. He  is prolific scholar, interested in the area of Canadian and criminal justice history, social history of crime, history of policing, history of alcohol control, and other areas of history of law enforcement. Dr. Marquis is on… Read more » 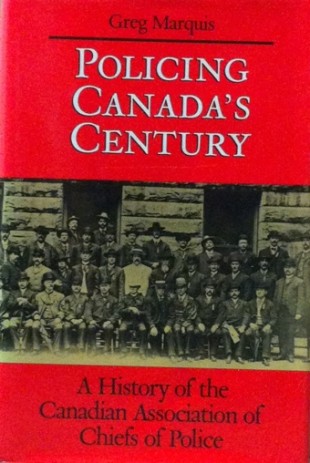 Foreword
THE CANADIAN ASSOCIATION OF CHIEFS OF POLICE vii

7 The Canadian Association of Chiefs of Police 229

Appendix: Officers of the CCAC/CACP 399