Local administration and law enforcement in pre-Confederation Canada was largely done through a coterie of appointed officials, most notably the justices of the peace, but also including constables, parish officers, overseers of the poor, and the like. Justices and grand juries met at sessions courts to make local regulations, and justices and other officials enforced those regulations as well as the common law and provincial statutes. Justices exercised a minor civil jurisdiction and shared petty criminal jurisdiction with the sessions court. This system, inherited from Britain, has not previously been closely examined for Canada, and Paul Craven’s masterful study of its operation and decline is thus a landmark in our legal history. In a remarkably deeply researched study of one county, Craven explains how the system worked, who used it, and how private and public roles and interests overlapped and interacted.

‘This detailed and thoughtful account of the administration of justice in Charlotte County, New Brunswick, before Confederation offers insights on how ‘low law’ – appointed amateur official and the general sessions of the peace – worked at the ground level…. Craven sheds light on the grey areas in which justice … was pursued. .. In combining biography with thematic analysis, Craven makes what could have been a dry-as-dust legal history a highly entertaining treasure trove for anyone interested in … social history’.  Margaret Conrad, University of Toronto Quarterly, Vol 85, 2016, pp. 565-566.

Paul Craven-(B.A. (Hons.), M.A., Ph.D., University of Toronto; C.S.C.L, Osgoode Hall Law School) Paul Craven is a retired York University professor who practices as a labour arbitrator and mediator in Ontario. He has published books and scholarly articles on labour relations and economic history as well as legal history. 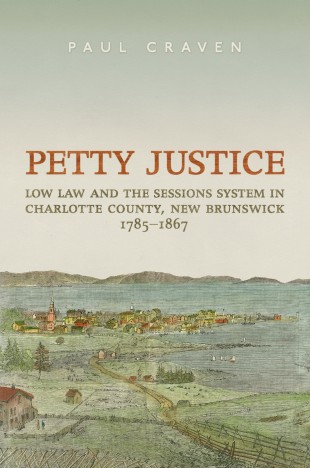 Part III  The sessions system and its enemies

11  The temperance magistrates: Licence and prohibition    415