edited by William Morrow. Published with the University of Toronto Press, 1995.

One of the first Canadians to champion the legal and cultural cause of the North’s indigenous peoples, William George Morrow, the senior partner in an eminent Edmonton law firm, seized the opportunity to go to the North in 1960, and act as a volunteer defence counsel for $10.00 a day. Morrow took on the quest for greater justice on behalf of the northern Natives long before this had become part of our national conscience. In these memoirs, he describes his daily struggles – first as a lawyer, and later as a judge – with the question of how an alien law should be applied to Aboriginal culture.At the height of his career, Morrow was travelling more than fifty thousand kilometres a year over bleak, snow-swept terrain to set up makeshift courtrooms in remote communities. He once had to interview a client in the only room where he could be assured privacy – an outhouse. A zealous reformer and a brilliant legal strategist, he fought and won many difficult legal battles with the government. His many accomplishments included sentencing that took into account the shorter life expectancy of northern peoples; the provision of local prisons enabling prisoners to serve sentences in their own communities; greater tolerance of Native and Inuit cultural values in interpretation of the law; and the instigation of juries made up of men and women from the community of the accused.By the time of his death in 1980, Morrow had not only altered the legal landscape of Canada’s North but instilled in Canadians a greater sensitivity to Native issues. These memoirs by a pioneer of legal reform tell the story of early legal battles against institutionalized racism in our country.

Above all [Morrow] illustrates through his accounts of the cases he tried, the spectacular metamorphosis the native people had to face as the influence of southern culture and justice increasingly impinged on their way of life.  Robert Leigh, Canadian Law Libraries, vol 21, 1996, p. 152.

William George Morrow, LL.B. (Alberta, 1939), practised law in Edmonton for some 20 years before he first travelled to the North West territories to act as volunteer defence counsel in 1960. In 1966 he was appointed a judge of the Territorial Court of the Northwest Territories, and over the next decade travelled some 50,000 kilometres… Read more » 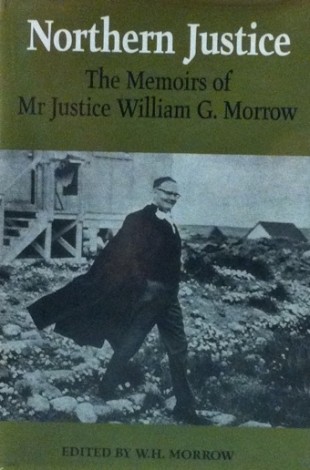