by Paul Romney. Published with the University of Toronto Press, 1986.

Mr. Attorney is a major exercise in revisionist historiography. Based on extensive research in often obscure sources, it offers an account of the office of Attorney General which reinterprets several key themes of nineteenth-century constitutional and political history. Paul Romney argues that grievances involving the Attorney General and the administration of justice were central to the rise of organized political opposition before the Rebellion of 1837 and remained important into the 1850s. Placing legal and administrative issues in their social context, Romney undertakes the first serious examination of developments of crucial importance to the administration of justice, such as the campaign for the Felons Counsel Act of 1836, the origin of the county attorney, the history of trial by jury, and the controversy over the idea of a provincial police force. Romney presents his arguments in sparkling and often combative prose.This important book has excited much controversy among historians and lawyers. Its theses increasingly command general assent.

Reviews of Mr. Attorney: The Attorney General for Ontario in Court, Cabinet and Legislature, 1791-1899

Romney's study raises some vitally important issues that ought to be at the center of debate among legal historians. This well-written and stimulating book should play an important role in ensuring the centrality of those questions. James Snell, American Historical Review, vol 93, 1988, p. 259.

Mr. Romney's book demonstrates something of what close study of law, law officers and legal procedures can achieve in understanding better how a political community came into being in the wilderness, and developed the form and modus operandi we know today. H.S. Ferns, English Historical Review, vol 105, 1990, p. 222.

Paul Romney has taught at the Center of Canadian Studies at Johns Hopkins University’s School of Advanced International Studies, and has written extensively on Canadian History. 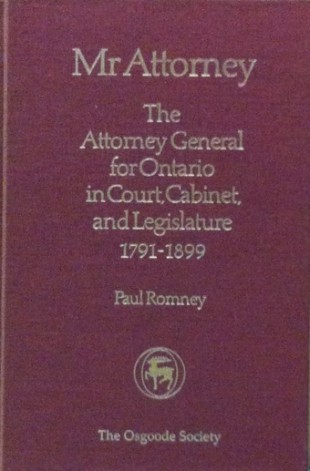 Conclusion: Law and the Constitution    313