by Lori Chambers, Professor, Department of History and Women’s Studies, Lakehead University. Published with the University of Toronto Press, 2007.

This book is a study of the operation of the Children of Unmarried Parents Act, in the courts and, principally, through the agency responsible for administering the Act, the Childrens’ Aid Society. It explores the experiences of unwed mothers regulated under the Act through a large collection of case files, and in the process tells us a great deal about the operation of law at the level of everyday life. Very much a socio-legal history, Lori Chambers’ book also contributes greatly to our knowledge of the history of motherhood and the family, sexuality, and moral regulation. Chambers argues that despite the altruistic objectives emphasized publicly by reformers, the Act failed to eliminate the poverty and stigmatization faced by illegitimate children. She also suggests that that failure is not surprising because of the contradictions inherent in a legislative scheme that gave the CAS control of both securing payment from fathers and of providing babies for adoption.

Reviews of Misconceptions: Unmarried Motherhood and the Ontario Children of Unmarried Parents Act, 1921-1969

A scholarly analysis of social workers' case records.... Chambers analyses and critiques the contradictions in the supposed reforms of the 1921 Act.... Although times have changed for the better, we hope, Chambers' insights are still relevant today. Chris Raible, Ontario Historical Society Bulletin, Summer 2008

[A] salient reminder that laws intended as reforms may well institutionalize existing gender and class power relations, or come to contradict the intentions of their creators.... Chambers makes a convincing case that the .... Act not only failed to substantially improve the lives of children, but that it stigmatized, humiliated and penalized the mothers of these children, and often left them impoverished.... Chambers ... provides a thorough overview of the predominant patterns in the [case] files.... [T]he book is in some ways a depressing story of legal reform that was not reform. Joan Sangster, Canadian Historical Review, vol 89, 2008

Lori Chambers' detailed examination of the Children of Unmarried Parents Act ... constitutes a welcome and important contribution to our knowledge....Anyone with an interest in the definition and regulation of the family would do well to read her analysis. Dorothy Chunn, Continuity and Change, vol 23, 2008 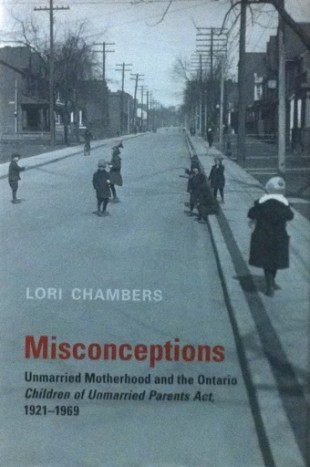 1 ‘Such a Program of Legislation’: Illegitimacy and Law Reform 14

2 ‘Doubtful of Her Veracity’: Procedures and Judgment under the Children of Unmarried Parents Act 33

3 ‘I Did Not Bring This Child into the World BY MYSELF’: Stories of Unwed Pregnancy 57

4 ‘Best for Our Babies’: The Adoption Mandate 85

6 ‘Known as MRS S’: Cohabitation and the Children of Unmarried Parents Act 140