by Lori Chambers, Professor, Department of History and Women’s Studies, Lakehead University. Published with the University of Toronto Press, 1997.

Married Women and Property Law in Victorian Ontario, by Professor Lori Chambers, Lakehead University, is a fascinating account of gender relationships in nineteenth-century Ontario as revealed through a series of laws which reflected Victorian attitudes to marriage, property, and power. ‘In all common law jurisdictions,’ Professor Chambers reminds us, ‘marriage, for women, represented civil death.’ Her manuscript explains the practical and theoretical implications of this reality for the Victorian family and especially for the married woman. This important revisionist study requires us to rethink a good deal of the conventional wisdom about gender relationships, the law, and the judiciary in nineteenth-century Ontario history. Of interest to all those concerned about the nineteenth-century origins of Canadian social institutions, it will prove of particular value to students of family, gender, and authority in Victorian society.

Reviews of Married Women and Property Law in Victorian Ontario

Lori Chambers’s study of married women’s property law in nineteenth century Ontario is ... interesting, well-written, and informative.... The book has been arduously and scrupulously researched in an effort to revise previous historiography on the topic .... I commend the book ... to all who are interested in both legal and feminist history, as it is a worthwhile contribution to both fields. Patricia Rooke, American Historical Review, vol 104, 1999, p. 552.

The courts, in Canada as in England, were engaged in a process of strengthening rather than challenging ideals of marriage, by attempting to civilize male behaviour by punishing bad behaviour. Chambers shows that women did not participate passively in this process, but used the courts to assert their right to decent treatment, to punish ill-behaved husbands and to articulate through the court new standards of manliness. Pat Thane, English Historical Review, vol 114, 1999, p. 1351.

Any reader interested in women’s history, especially the development of women's property rights through legislation, will find this book thought provoking. It is first and foremost a historical examination of property law, but Chambers does a good job of integrating other nineteenth century legal concepts and ideas as well. Cindy Picco, Saskatchewan Law Review, vol 61, 1999, p. 591. 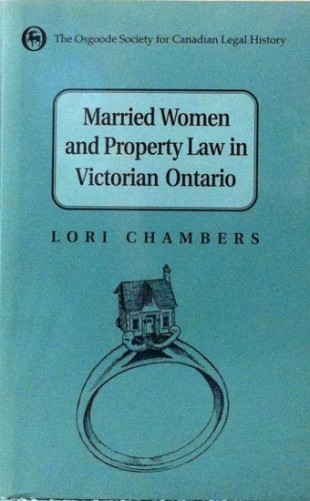 1 ‘So Entirely under His Power and Control’: The Status of Wives before Reform / 14

2 ‘A Life That Is Simply Intolerable’: Alimony and
the Protection of Wives / 28

3 ‘To Properly Protect Her Property’: Marriage Settlements
in Upper Canada / 53

9 ‘Lending Aid or Encouragement to Fraudulent and Dishonest Practices’: Wives and Their Creditors after 1884 /148

10 ‘Being Terrified and in Fear of Violence’: The Limitations of Separate Property as a Protective Device / 166