This is a path-breaking study of the every day work of civil law and civil courts. It examines the type of litigation pursued (mostly debt), how the courts worked, and how the economy operated in a society with very little cash and in which credit was the lifeblood of commerce. Muir employs both quantitative and qualitative analyses of all extant case files and explains how eighteenth-century court procedure worked. He situates his study against the society and economy of Halifax, analyzing who sued who and why and how the legal system fit into patterns of economic relations and activity.

A ‘refreshingly empirical study …. Muir has delved deeply into the extensive records of the civil courts of Halifax …. Muir stresses the unequal distribution of advantages from courts that favoured creditors over debtors and merchants and traders over others…. Muir offers us a close reading of the largely routine workings of the civil law.’  Jeffrey McNairn, Social History-Histoire Sociale, Vol 50, 2017, pp. 471-473

Perhaps the most litigious people in the British seaborne empire were the mid-century settlers of Nova Scotia. The evidence for this is found in James Muir’s remarkable study of Halifax civil courts…. Altogether the book constitutes a major contribution to the social history of Nova Scotia in the era before the American revolution.’ Julian Gwynn, Journal of the Royal Nova Scotia Historical Society, Vol 20, 2017, pp, 96-97

‘The strength of this volume is not simply the author’s consideration of the numbers of litigants. There is far more texture here… about legal culture. Several issues are fundamental to legal historians of any stripe. The first … concerns why some disputes do not go forward to judgment and seem to be resolved by compromise. Second is the choice of whether to pursue litigation or arbitration… Finally, victory in court, then as now, is not particularly useful if judgments cannot be enforced. In short, this is an interesting volume that presents an important question for both legal and social and economic historians.’ Lloyd Bonfield, Continuity and Change, Vol 33, 2018, pp. 145-147

REVIEWS OF LAW, DEBT AND MERCHANT POWER HAVE ALSO APPEARED IN THE FOLLOWING:

James Muir is an Assistant Professor at the University of Alberta’s Faculty of Law, as well as the university’s Department of History and Classics. He researches and teaches in the areas of law and colonialism in Canada, British Imperial history, as well as employment and Labour law history. His research has looked at Nova Scotia,… Read more » 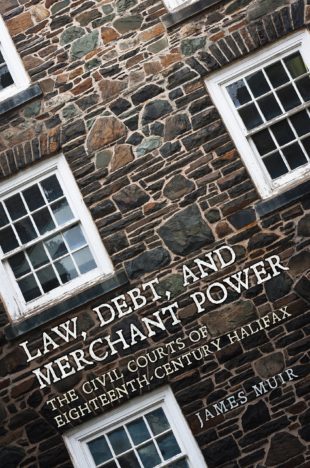