by David Ricardo Williams. Published with the University of Toronto Press, 1995.

In 1924 Mackenzie King, on bended knee, pleaded with lawyer, Eugene Lafleur to accept the chief justiceship of Canada, but Lafleur refused. Another lawyer, Gordon Henderson was offered an appointment to the Ontario Court of Appeal but rejected it. Lafleur, Henderson, Frank Covert, Aimé Geoffrion, W.N. Tilley, Isaac Pitblado, and J.W. deB. Farris – each of these lawyers stood at the summit of the profession in Canada and each made the decision, deliberate and not forced on them, to remain just lawyers. In this collection of biographical essays David Ricardo Williams portrays the careers and personalities of seven eminent men whose contributions to the legal fabric of the country have been immeasurable: Farris, who was capable of flamboyance but never relied on it, did criminal work to the end of his career and was for a time attorney general for British Columbia. Lafleur, who when insulted by a judge, could walk out quietly from the courtroom in the middle of a case and wait for the chief justice of the Supreme Court of Canada to come to his hotel room and persuade him to continue his argument. Tilley, who knew more law on more subjects than anyone else in his time, was a director of several major Canadian corporations, among them the Canadian Pacific Railway. Geoffrion, a fast-talking man, was known for his light-hearted badinage with judges and for his business acumen. Born a few months before Confederation, Pitblado was acknowledged nationwide as an expect in the highly complex – and for lawyers, lucrative – field of freight rates. Covert was one of the most influential lawyers in the Atlantic region and a pioneer as a labour lawyer. Henderson was a master of intellectual property law and was dedicated to community service. These portraits demonstrate the importance of the role of the Privy Council as a court of last resort for Canada. They emphasize the dominant role played in the profession by the barrister as opposed to the solicitor, and they illustrate the value system and attitude of a generation of lawyers who regarded the law as a profession rather than a business.

There are in each of the sketches nuggets of information that makes the reader pause in amusement or admiration or just plain wonderment. .... All in all, a book to be dipped into for pleasure.  D.M. Goldie, The Advocate (Vancouver Bar Association), vol 54, 1996, p. 455.

David Ricardo Williams worked as a lawyer in British Columbia and was also a writer of both fiction and history. His first book was a history of his parish and after this he wrote books mostly concerned with legal and political figures. Williams was called to the B.C. bar in 1949 and subsequently moved to… Read more » 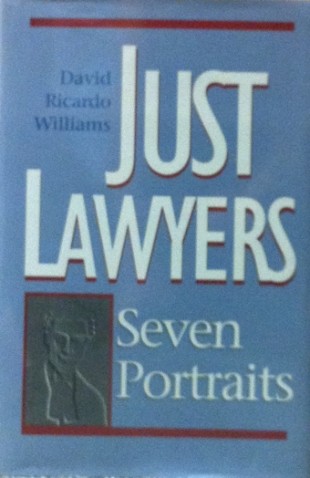