by George D. Finlayson, formerly of the Court of Appeal for Ontario. Published with Dundurn Press, 2003.

John Robinette is generally acknowledged to have been the foremost counsel of his era and was, perhaps, Canada’s greatest advocate of all time. Comfortable before any court or tribunal at any level and regardless of issue, he combined all the technical skills of the finest courtroom tactician with an unerring good judgment that kept him cerebrally above the fray while at the same time allowing him to participate with relish in the forensic battle on the hearing room floor. A formidable verbal gladiator to his adversaries, he is as well remembered for his unfailing courtesy to court and counsel alike. He never took unfair advantage of an opponent and outside the courtroom he was revered for his kindness and generosity to younger counsel whom he treated, unpretentiously, as equals.

John J. Robinette, Peerless Mentor, is an intimate memoir by George Finlayson, a man who had unique access to Robinette. From early 1951, Finlayson was Robinette’s student, junior and partner in that order until Finlayson’s elevation to the Ontario Court of Appeal in December of 1984. Thereafter, he continued as his friend and confidant until Robinette’s death in late 1996. Over these years he was witness to Robinette’s extraordinary career as a lawyer and is in a privileged position to report on his achievements, his successes, and his disappointments.
The result is an intensely personal and engrossing account of the professional life of a great advocate told against the changing background of his time.

Finlayson’s recollections of his mentor make fascinating reading, combining his personal knowledge of the man with the legal, social and political settings in which he performed. The Finlayson reminiscences make fascinating reading for anyone interested in the law and one of Canada's greatest advocates. I highly recommend it.  Bob Aaron, The Toronto Star, 29 November 2003, p. MO6.

It’s a hybrid - part memoir, part biography. While that might sound a touch unwieldy, it turn out to be a marvellous approach. The reader benefits from seeing how two mighty lawyers approached their cases, firms and relationships. Both were a creation of a city and a profession changed beyond recognition. Firms were few, female partners non-existent, and the legal world revolved around the trial courts.  Kirk Makin, Globe and Mail, 12 January 2004, p. B10. 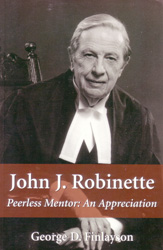 Chapter Six
Apprenticed to the Law
119

Chapter Ten
Taking in Our Own Laundry: Ross v. Lamport
222

Chapter Eleven
Taking in Our Own Laundry Part II: NONG and Leo Landreville
238

Chapter Twelve
The View from Olympus
271

Chapter Sixteen
The Mother of All Constitutional Cases
364