Shortly after Confederation Canada acquired the territories formerly owned and administered by the Hudson’s Bay Company. Among the formidable challenges brought by this massive land acquisition, the most notable was the task of reconciling the aboriginal peoples of the plains to Dominion sovereignty. Much has been written about the treaty making process of the 1870s, and about the metis resistance of the late 1860s and 1880s, but we know relatively little about the introduction of Canadian legal regimes. Professor Gavigan fills that historiographic gap, examining in considerable detail the introduction of Canadian criminal law and criminal justice institutions in the prairie west after 1870. Using newspapers, penitentiary records, Indian department files, and, principally, the records of stipendiary magistrates, she shows the law’s impact on the aboriginal peoples of the west, as well as their use of it in coming to terms with the new political reality.

Reviews of Hunger, Horses, and Government Men: Criminal Law on the Aboriginal Plains, 1870-1905

[A] well structured and clearly written analysis of the relationship between the plains First Nations and Canadian criminal law from 1870 to 1905....This book is beautifully crafted history. Sidney Harring, Canadian Historical Review, vol 95, 2014

Members of the judiciary and of the legal profession ... will welcome this latest contribution to our ever-increasing fount of knowledge and understanding on the subject of the difficulties associated with judging individuals who do not share the same background, language, culture, religion [as us].... At the end of the day the author is quite successful in resorting to what she describes as focussing on 'low profile cases' in order to demonstrate the actual life experiences of members of the First Nations. Gilles Renaud, Canadian Law Library Review, vol 38, 2013, pp. 92-93 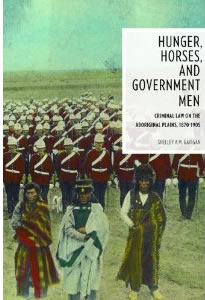 1 Legally Framing the Plains and the First Nations/ 24

2 “Of Course No One Saw Them”: Aboriginal Accused in the Criminal Court/ 50

3 “Prisoner Never Gave Me Anythiung for What He Done”: Aboriginal Voices in the Criminal Court/ 121

4 “Make a Better Indian of Him”: Indian Policy and the Criminal Court/ 121

Afterword: A Methodological Note on Sources and Data/ 189