We are very grateful to Judge David Vanek for offering us the opportunity to publish his memoirs. In Ontario provincial court judges are the workhorses of the judiciary, carrying out a huge range of tasks and bearing an enormous burden. Most students of Canadian legal history are familiar with the book written by that notorious character, George T. Denison, who published his own Recollections of a Police Court Magistrate in 1920. In that volume Denison told his sometimes astounded readers that the concern of his court was not law but justice. “I never follow precedents,” he related, “unless they agree with my views.” From his appointment in 1877 until the end of 1919 there were 650,000 cases. “The majority of these have been dealt with by me, as for the first twenty years I had no assistant.” As David Vanek makes clear, the work of the provincial court has changed greatly since George Denison’s day and David Vanek’s courtroom was characterized by high standards of legal professionalism. What has not changed since the late nineteenth century, however, is the significance of the so called “lower courts” and Judge Vanek and his colleagues dealt on a daily basis with a large and sometimes startling range of cases. This marvellously readable book offers wonderful windows into the travails of a Jewish immigrant family living in the Toronto area in the inter-war years, a frank yet humorous record of Mr. Vanek’s experiences, military and otherwise, during World War II, and behind-the-scenes accounts of the struggle to reform and win new stature for provincial court judges in Ontario in the 1960s and 1970s. The book also discusses a number of David Vanek’s significant cases including the case of the baby deaths at the Hospital for Sick Children in Toronto. This engaging book, charming and insightful, makes a significant contribution to both social and legal history.

Reviews of Fulfilment: Memoirs of a Criminal Court Judge

A very important contribution in understanding and appreciating the perspective of those who are given the heavy responsibility of presiding in the busy trial courts .... This fine publication ... is a unique and welcome addition to the literature in Canadian Legal History. Rick Libman, Provincial Judges' Journal, vol 23, 2000

David Vanek served as a Provincial Court judge from 1968 until 1989 when he retired. He was called to the Bar of Ontario in 1939, just as World War II was breaking out in Europe. During the war Vanek served in the Canadian Intelligence Corps and Field Security in England from 1943 to 1945. Upon… Read more » 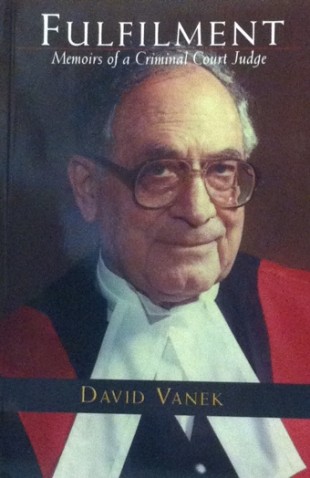